Saturday 11th November 2006 was a moving and poignant for me as at 11am, I was standing side by side with four of my best friends in complete and respectful silence next to the headstone of an unknown soldier at the Hooge Crater Cemetery.

We had decided not to be at the Menin Gate at 11am but pay our own tribute and remembrance to a man whose age we not know, whose name we not know, who was born in a village that we not know.   For two minutes on Saturday 11th November 2006 he had an identity, for he was the man that we mourned.

There are now 5,923 Commonwealth servicemen of WWI buried or commemorated in Hooge Crater Cemetery. 3,579 of the burials are unidentified, but special memorials record the names of a number of casualties either known or believed to be buried there. 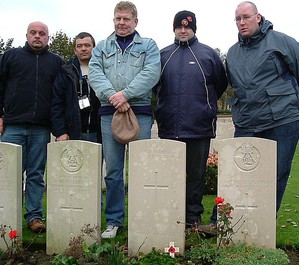 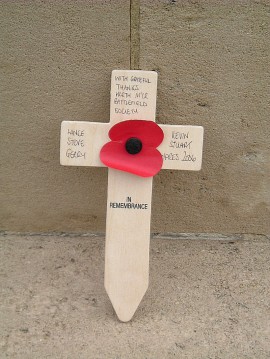 After the sombre time at Hooge crater Cemetery we walked across the road and went into the ‘War Museum Hooge Crater’.   It’s a little museum that is packed literally to the rafters with items and memorabilia from The First World War.

It is built in an old chapel – the chapel itself dates from the 1920s and I assume it was used as a place of pilgrimage, solitude, reflection and comfort to those visiting the Hooge Crater Cemetery and the other cemeteries in the area. In 1992 the chapel and the school annex at the side was bought and saved from ruin as it was now in a bad state of repair. By 1994 it was opened as the museum and Niek and Ilse Benoot – Watteyne have owned it since 2009.  Some of the stuff that was found and dug out by ‘The Diggers’ at The Yorkshire Trench we mentioned earlier is located here.

As a god send to the tired, damp and starved battlefield tourist, there is also a nice little café with loads of shells that have been made into impressive ‘’Trench Art’.  The café make decent sandwiches and of course the staple diet of the NMBS on our tours in France, a Croque Monsieur.

To be honest, the actual entrance fee of 4.50€ is a bargain – but please beware, the museum is closed on Mondays.

Full details of the museum are here - http://www.hoogecrater.com/en 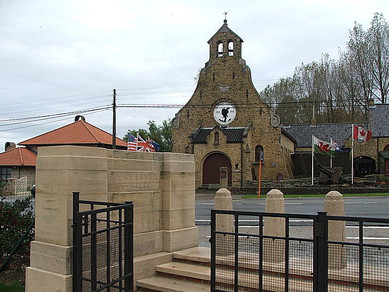 After visiting Hooge Crater Cemetery and War Museum Hooge Crater, the obvious port of call was the crater that these two places were named after.  The Battle of Hooge between the 30th and 31st July 1915, was part of the Second Battle of Ypres – this saw the first concerted use of German Liquid Fire Attack Flamethrowers (Flammenwerferapparaten) it was briefly used against the French outside Verdun in the February of 1915.

During the First World War Hooge was the site of a château which was used as the Divisional Headquarters for the area. The staff at the château was all killed when the château was shelled on 31 October 1914. German forces attacked the château between 24 May and 3 June 1915, and, despite the detonation of a British mine by the 3rd Division, leaving a massive crater, took control of the château and the surrounding area on 30 July.

Oddly The site of the chateau is now a Children’s theme park called  Bellewaerde, like a mini Alton Towers.   Close to the theme park is a hotel, and next to that a pond formed by a crater from a mine blown up by the British on 19 July 1915.  Bellewaerde is also a battle that lasted two days between the 24th and 25th May1915.

The Germans released a gas attack on a 7 km front.   British troops were able to defend against initial German attacks but eventually they were forced to retreat to the north and south. Failed British counterattacks forced a British retreat 1000 m northwards. Upon the end of the battle the Ypres salient was 5 km deep. 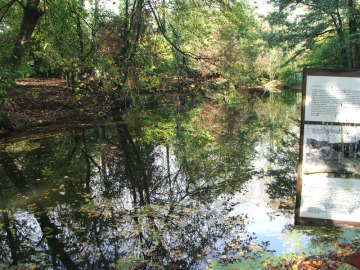 The crater with an information board in the foreground 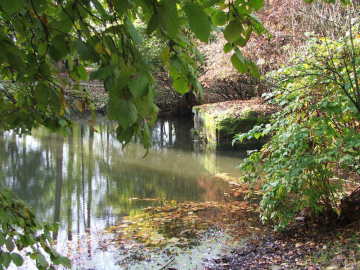 A bunker at the edge of the crater

You can see Hill 62 from Hooge and just before we headed there and to see the sights and sites, we stopped off at Birr Crossroads CWGC.  Birr is a town in County Offaly, Ireland and has family and heritage links to Gerry, so he was chuffed to visit it. Birr Cross Roads was named by the 1st Leinsters from their depot.  At Birr there are a number of Maori soldiers who are buried from New Zealand Maori (Pioneer) Battalion.  Also buried at Birr is a VC and MM Winner – Captain H Ackroyd of the Royal Army Medical Corps.

Leaving Birr we headed to Sanctuary wood and Hill 62. Close to the summit is the Canadian Hill 62 (Sanctuary Wood) Memorial which commemorates the actions of the Canadian Corps in defending the southern stretches of the Ypres Salient between April and August 1916 including actions in battle at the St. Eloi Craters, Hill 62, Mount Sorrel and Sanctuary Wood.

These battles marked the first occasion in which Canadian divisions engaged in planned offensive operations during World War I.  In those actions the Canadians re-took vital high-ground positions that denied the Germans a commanding view of the town of Ypres itself. The memorial is located beside Sanctuary Wood on the top of Mount Sorrel, which lies next to 'Hill 62' all of which the Canadians held or recaptured from the Germans during those offensive operations in early June 1916.

The British Official History of the war recorded "The first Canadian deliberately planned attack in any force had resulted in an unqualified success."

The Hill 62 (Sanctuary Wood) Memorial site is at the end of the Canadalaan (Canada Lane). The memorial park is made up of a beautiful series of three terraced gardens leading up the hillside to the grey granite block monument in a grassed circle on a low flagstone terrace at the top.  Although the time we visited the gardens had been all dug up and new grass, fauna and flora were to be planted. 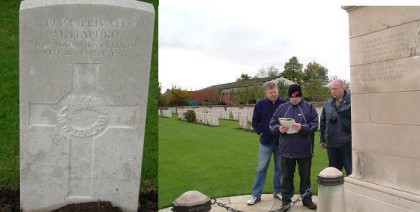 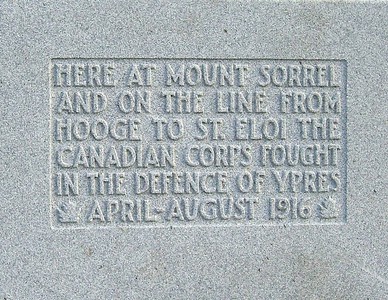 Close to the Canadian memorial is Hill 62/Sanctuary wood Museum.  I will be honest I hated it for a number of reasons.  I am not being rude but the bloke who ran it had dreadful B.O. that permutated the museum, the owner was also very aloof and rude to customers. Now, as the rest of the lads in the NMBS will say, I love cats, but the museum stinks of cat urine and there are many cats parading around the place, including the Cafe.

The owner annoyed me more by charging a young girl – who was clearly aged no more than 12 was charged the adult price because she could not prove she was younger than 14.After the war the wood was turned into a private museum by the land's owners, the Schier family.

They realised at an early stage that the wood would be a large money spinner, sorry, of great interest for tourists and today you can still seem the trench system – although with props and corrugated iron sheets you ponder how much of the trenches are now ‘Authentic’.

The museum was closed during WW2 and the artefacts buried under concrete in the cellar. Visiting Germans were told that the artefacts had been stolen by the British.

Aside from battlefield artefacts the interior of the museum offers 3D stereoscopic photographs of highly graphic scenes taken during the war. In my opinion these 3D pictures are very, very macabre, ghoulish and gruesome they are also fascinating, but the photos are totally unsuitable for children, including dismembered bodies of both soldiers and horses and the and the 3D greatly emphasises the horror.

Now this may just seem all a gripe because I did not like the place or I am stilled vexed by the owners rudeness in over-charging the girl.  All I can say is please use the Trip advisor Link here - http://www.tripadvisor.co.uk/Attraction_Review-g188675-d1580993-Reviews-Sanctuary_Wood-Ieper_Ypres_West_Flanders_Province.html and read all the reviews yourself. 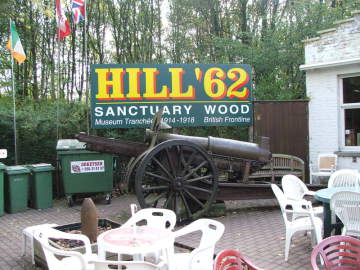 Home of a very rude man 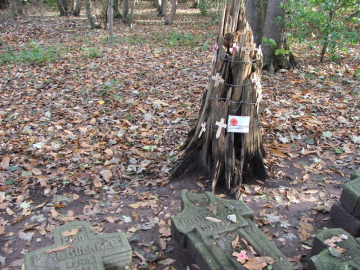 Back along the Canadian Road toward Ypres is a nice little memorial to 2nd Lt Keith H Rae.  As mentioned earlier, the Germans had used flame throwers at Hooge and it was this attack that had killed Rae.  His family erected a Celtic cross on the spot where he was last seen at Hooge, close to Bellewaerde Farm.

It was moved to its current position at Sanctuary Wood Military Cemetery after the original site fell into disrepair.  There is an Identical cross, connect to Rae at Flaybrick Hill Cemetery in Birkenhead (the B&W picture) below. 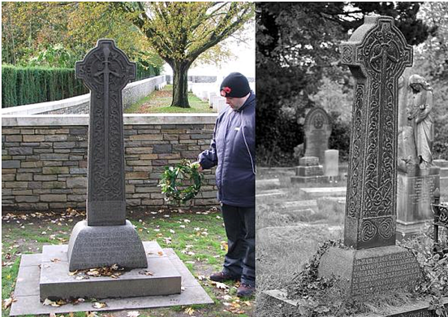