The next morning we woke and the eggs that we got from the Ponderosa did the trick for a mighty fine breakfast washed down with a few cups of coffee and a tea for Lance and we were off on the travels again.   We did a special trip and crossed the into Germany to the large Reichswald Forest War Cemetery.  It was special, in a strange sort of way for Kevin.

Kevin’s Nana first husband was called Tommy Stubbs, there is more information relating to Tommy on his own page later on this site.

Reichswald Forest War Cemetery was created after the Second World War when burials were brought in from all over western Germany and is the largest Commonwealth cemetery in the country. Some of those members of the land forces buried there died in the advance through Reichswald Forest in February 1945.

Others died crossing the Rhine, among them members of the airborne forces whose bodies were brought from Hamminkeln, where landings were made by the 6th Airborne Division from bases in England. Some of the airmen buried in the cemetery lost their lives in supporting the advance into Germany, but most died earlier in the war in the intensive air attacks over Germany. Their graves were brought in from cemeteries and isolated sites in the surrounding area.

There are now 7,594 Commonwealth servicemen of the Second World War buried or commemorated in the cemetery. 176 of the burials are unidentified. There are also 78 war graves of other nationalities, most of them Polish. Special Memorials to 9 airmen are located at the East boundary wall, near Plot 10. Further Special Memorials to 7 airmen are located within Plot 31, near the Cross of Sacrifice. The cemetery was designed by Philip Hepworth. Kevin and I made the school boy error of wearing trainers, the weather for the Market garden trip had been wonderful, but the early morning dew on the grass at Reichswald had made our trainers rather soggy.

We returned to the cemetery in 2012 as part of the Dambusters tour.

Close by was the Donsbruggen German military cemetery, but has civilian burials, casualties of the bombardments prior to the Allied invasion. There are some poignant sights, young sisters buried side by side, and countless female graves with floral tributes. (see Gallery) 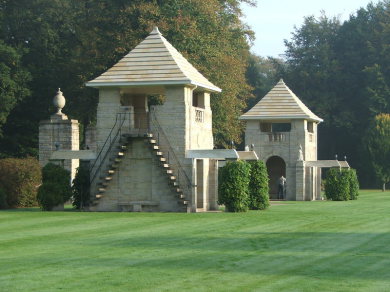 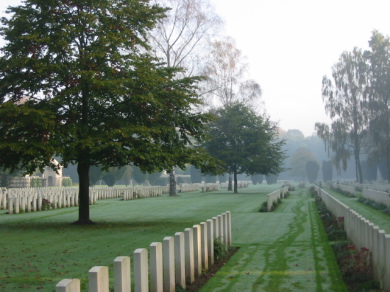 After a stop for a coffee and a wonderful patisserie in a delightful little village called Gennap (it is really a good village for a pit stop and to stock up on supplies or gifts, we actually went back in 2012) we visited the fabulous National War and Resistance Museum at Overloon in The Netherlands.

“War belongs in the museum” is the motto of the Dutch National War and Resistance Museum, which is quite true for this museum because it is packed to the rafters with stuff.  The museum focuses on many aspects of the Second World War including the Holocaust, Market Garden and being Overloon, The Battle at Overloon.  This is known as the heaviest tank battle ever on Dutch soil.

In the museum you will still find several vehicles from that battle, such as a German Panther tank, and British and American tanks and guns. Attached is the Marshall Museum, which is unashamedly very Americanised. In this museum there are more than 150 historical vehicles, vessels and aircraft, which provide an excellent overview of the military efforts during the Second World War.

You will find layouts that provide you with a picture of the invasion in Normandy on D-Day, and also of the Battle at Arnhem and the Battle in the Ardennes. Also central in the Marshall Museum is the Red Ball Highway. This was the name of the American logistical system used to supply the front-line troops during their advance into France you can get more information for both museums at their website www.oorlogsmuseum.nl/ 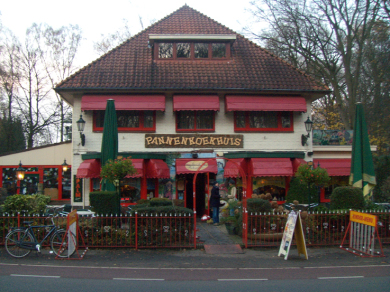 After a long day we headed back and in the Village where we were staying (Berg en Dal) is a pancake house, so when in Rome... To be honest the pancakes were huge and really nice and you could have sweet or savoury fillings. The place is called Pannenkoekenrestaurant De Heksendans and is opposite the entrance to a theme park.  It’s a treat and well recommended.  The Staff were English speaking and polite. (they left an impression on us, as we revisited in 2012 - Dambusters Tour) After our fill of pancakes we headed back to the Ponderosa and chatted about going to see a Roman battlefield in Germany.  Gerry was well up for it and it was only 134 miles away, so a 268 mile round trip to a battlefield. It was decided that we go the next day and split the Market garden trip up.