When we visited Waterloo, it was a trip that one of our members had looked forward to for a while.  Gerry is a big fan of Richard Sharpe, the Cult TV series set during the Napoleonic and Raj wars and the books by Bernard Cornwell.

Seeing places like Quatre Bras (Pictured below) and the whole battlefield was a real treat for Gerry. 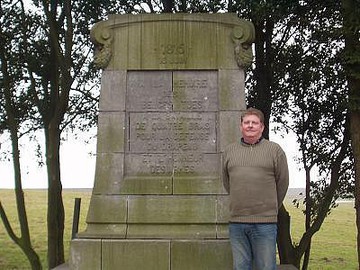 Waterloo was amazing in many ways and a bit of a let down in others. The whole historical setting is fantastic, some of the buildings are still there, monuments are and the views from the Butte du Lion are wonderful.

When we were there in 2003, The museum next to the site is very low brow and had not changed when we came back in 2009 for the better. The Inn next to the battlefield is a godsend for the weary traveller.

The Bivouac de l'empereur Inn does fine beers, good coffee, has a hearty warming fire (the owner did say to us that Napoleon himself stood in that fireplace, but we wasn't too sure if he was pulling our!) and the French Onion Soup was "Tres Bon et Merveilleux !" The Butte du Lion (Hill of the Lion) is the main feature at the battlefield today and is a huge artificial mound that is 43 metres high (141ft) and the 226 that lead to the top are steep.

We would recommend that anyone with a heart condition, COPD or bad Asthma should consider sitting it out or doing the steps slowly. Yes the NMBS are hardly Triathlon competitors, but we have a bit of fitness and the steps killed us. Obviously none of us would admit this.

There is a charge of several Euros to get to the top; check the website for correct at visit price - but as mentioned the views are worth it.

The whole monument is dedicated to William II of the Netherlands (the Prince of Orange) - and the site that the Butte is located is the site where he fell from his horse having been hit by a musket round. It is ironic that he got such a memorial, as he committed three massive strategic blunders during the Battle of Waterloo but being the Kings son has perks! 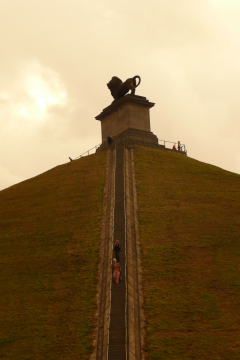 Waterloo is a number of battles and small skirmishes in one.  The Battle of Ligny is important, also the fight at Quatre Bras and Wavre are important.  With Waterloo, The Ardennes and Verdun ticked off the “to do” list, the 2003 tour came to an end.  For me it was possibly one of the most enjoyable trips that we have done, but on saying that Verdun and The Ardennes are two of my favourite battlefields and the extra trip to Waterloo was an added bonus.

2004 would see us return to a previous battle and we would be going to Normandy with new members, Kevin and Stuart. We would also be going during the celebrations that marked the 60th Anniversary of D-Day.