Part Two of the Market Garden Tour in 2005

The first large city that we explored was Eindhoven, which is a city you can see faced the horrors of war.  It was very new and had that 1960s look to it.  We parked near PSV Eindhoven’s Phillips Stadium, a ground that has seen greats like Ruud Gullit, Romário, Ronaldo (Brazillian) and Ruud van Nistelrooy play. So like other stadiums it was built on the industrial outskirts of the city.

The other problem was that we only chose the day to visit Eindhoven when the Eindhoven Marathon was on, so the crowds, well-wishers and runners we packing the city and the places we wanted to visit.  Large-scale air raids, including the preliminary bombing during Operation Market Garden to aid the US 101st Airborne Division paratroopers in securing the bridges in and around the town on 18 September 1944, destroyed large parts of the city.

The reconstruction that followed left very little historical remains and the post-war reconstruction period saw drastic renovation plans in high-rise style, some of which were implemented. At the time, there was little regard for historical heritage; in the 1960s, a new city hall was built and its neo-gothic predecessor (1867) demolished to make way for a planned arterial road that never materialised. 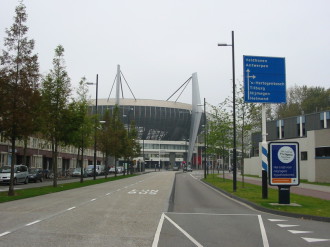 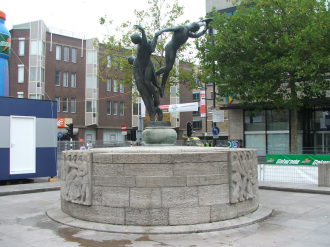 Eindhoven Liberation Memorial , You can see a large Gatorade bottle to the left for the marathon

We criss crossed The Netherlands between Eindhoven and Veghel, picking up must see sights and things that are off the beaten track.  As an entire British Airborne Division descended to the earth to hold one of the bridges The Netherlands, so did two American Divisions land to hold open the vital routes that hopefully would lead into Germany.

Upon landing they faced the same problems that confront the 1st Airborne on the Neder. Both divisions were dropped too far from their objects to affect a ‘coup de main’ and hold the bridges intact.

At Son ran the Wilhelmina Canal, which served to direct the water flow along the lowlands of Holland and through its fertile farms. The 502nd Parachute Infantry Regiment under the command of Colonel John H. Michaelis was tasked to cover the LZ as the 506th PIR moved against Son. They were then tasked to take the secondary bridge over the canal located just south of the town of Best. Leading the attack is H Company (which drew the short straw).

The road leading to the bridge was clear and, like most roads in the country side of Holland, buffered on either side by farmland. The regiment had no clear intelligence on enemy presence in the sector other than a light garrison at the bridge itself likely under strength and under equipped.

The Whermacht commanders, who had reacted so quickly to the airborne threat around Arnhem would repeat the feat at Best. The weight of the 59th Infantry Division had been mobilized into action and would move quickly toward best and the bridge.

The bridge of course, was only defended by the usual scabby sort of garrison soldiers of the like that defended so many other bridges such as Pegasus that we visited the year before. They lacked the resources, the will or any expectation to hold the bridge against a determined attack, which made their reinforcement all the more important. With the Son Bridge destroyed, Allied engineers were forced to take time to throw across a replacement. Field Marshall Model has ordered that as many bridges as possible be held instead of blown up so to assist in the launching of counter-attacks, but if there was no other alternative all bridges could eventually be destroyed.

Two other Must sees we visited. One is sad and shows the true heroism that happens in wars. Joe E Mann died just aged 22 in Best, North West of Eindhoven.

He single-handedly destroyed an enemy emplacement and continued to fire on the enemy from an exposed position until being wounded. Despite his wounds, he insisted on serving guard duty during the night. The next morning, during an enemy attack, Mann smothered the blast of a hand grenade with his body, sacrificing himself to protect those around him. For these actions, he was posthumously awarded the Medal of Honour a year later, on August 30, 1945.

In remembrance of Mann, a memorial monument was placed at the site of his death (Pictured below). Near the same site, an open-air theatre (which remains in use today) was named after him. An adjacent road also carries his name.  He also had a ship named after him. The United States Army ship USAT Private Joe E. Mann was in service from 31 October 1947 until she was transferred to the Navy on 7 Aug 1950.

The Citation for his MoH is as follows For conspicuous gallantry and intrepidity in action at the risk of his life above and beyond the call of duty: He distinguished himself by conspicuous gallantry above and beyond the call of duty. On 18 September 1944, in the vicinity of Best. Holland, his platoon, attempting to seize the bridge across the Wilhelmina Canal, was surrounded and isolated by an enemy force greatly superior in personnel and firepower. Acting as lead scout, Pfc. Mann boldly crept to within rocket-launcher range of an enemy artillery position and, in the face of heavy enemy fire, destroyed an 88mm gun and an ammunition dump.

Completely disregarding the great danger involved, he remained in his exposed position, and, with his M-1 rifle, killed the enemy one by one until he was wounded 4 times. Taken to a covered position, he insisted on returning to a forward position to stand guard during the night. On the following morning the enemy launched a concerted attack and advanced to within a few yards of the position, throwing hand grenades as they approached. One of these landed within a few feet of Pfc. Mann. Unable to raise his arms, which were bandaged to his body, he yelled "grenade" and threw his body over the grenade, and as it exploded, died. His outstanding gallantry above and beyond the call of duty and his magnificent conduct were an everlasting inspiration to his comrades for whom he gave his life. 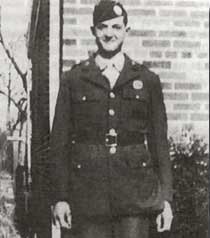 Near the town of Best you can find the "Bevrijdende Vleugels" museum (Wings of Liberation) which is based on an old Mobilisation Complex of the Dutch Army. On September 17th 1944 airborne units of the 101st US Airborne Division landed in this area as a part of operation "Market Garden".

Within the museum is a large outdoor site and 3 large halls containing the following campaigns: the liberation of South Limburg, Operation Market Garden and Operation Barbarossa in Russia. The other halls contain an American Mobile Command Post, a camp of the Scottish 51st Highland Division and two aviation halls. All in all there is a great diversity in the museum's collection. There even is a Dakota and a Lockheed TF-104G Starfighter (Kevin was very giddy).

To children and maybe the NMBS boys reclaiming childhood it seems like you are taking part in the action when you're walking through the enormous, richly decorated dioramas. Also take a good look around when you walk from hall to hall, because there's quite a lot of equipment (trucks, guns, airplanes and other vehicles) on display. 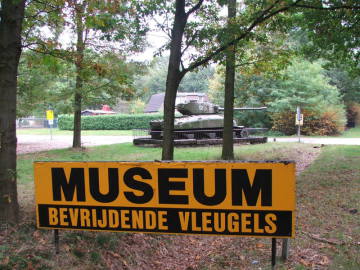 We struggled to find the memorial to the 15th Scottish Division who liberated Best on 24th October 1944, it is a cracking memorial too, well worth the faff of finding it.

The 15th Scottish Division was a second line Territorial Army Division, the duplicate of the British 52nd (Lowland) Division and served in the Second World War, where, among other actions, it was part of VIII Corp under Lieutenant-General Sir Richard O'Connor in Normandy, notably at Mont Pinçon.

They fought virtually continuously from then on through Caumont, the Seine Crossing, the Gheel Bridgehead, Best, Tilburg, Meijel, Blerwick, Broekhuizen, and the Maas and across the Rhine.

Their particular distinction was to be selected to lead the last set piece river crossing of the war, the assault across the Elbe (Operation Enterprise) on 29 April 1945 spearheaded by Brigadier Derek Mills-Roberts 1st Commando Brigade, after which they fought on to the Baltic occupying both Lübeck and Kiel.

They were the only division of the British Army of the Second World War to be involved in three of the six major European river assault crossings; the Seine, the Rhine and the Elbe.

On 10 April 1946 the 15th (Scottish) Division was finally disbanded. Its battle casualties – killed, wounded and missing – in twelve months of fighting were 11,772. 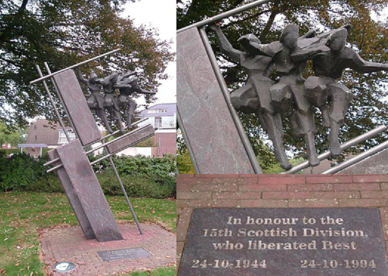 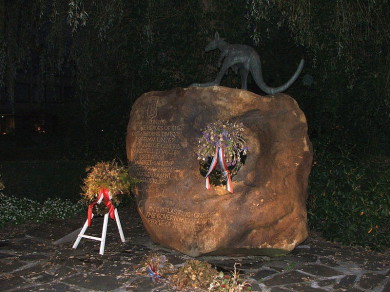