The Malmédy Massacre was one of the worst atrocities committed against prisoners of war in the West European sector.

On December 17th, men from Battery B of the 285th Field Artillery Observation Battalion were ordered to move from Schevenhutte, near Aachen, to St Vith in the Ardennes. Their route took them near to the town of Malmédy. On their journey, on the N-23 St Vith road that passed to the east of Malmédy, Battery B met up with Lieutenant-Colonel David Pergrin of the 291st Engineer Combat Battalion.

Pergrin had heard that the Germans were along the route which the men from Battery B were taking. He advised them to take a different route to St Vith. However, the officers in charge of the battery decided that they had their orders and, ignoring Pergrin's advice, continued along their designated route.

This journey took them to what the locals called the 'Baugnez Crossroads' - two miles south-east of Malmédy. In fact, there were five roads there and to the Americans it was known as 'Five Points'. A military policeman - and previously placed route markers - directed the convoy along its way.

About half-a-mile from the 'Baugnez Crossroads', the first vehicles in the convoy were fired on by two tanks from the 1st SS Panzer Division led by  Joachim Peiper.  This unit was one of just two units in the whole Nazi military allowed to use Hitler's name in its title - the 1st SS Panzer Division Leibstandarte  Adolf HitlerThis unit had a fearsome reputation and Peiper was known as a man who would let nothing stand in his way of success - including the taking of prisoners. In the Soviet campaign, Peiper's unit was known as the 'Blowtorch Brigade' for its violence towards civilians.

On this day in particular, it is said that Peiper was in a particularly foul mood as his advance had not been as successful or as swift as he had hoped. Though the 1st SS Division had suffered few casualties in terms of manpower, it had lost tanks and half-tracks in its advance as the US 99th Infantry Division had put up a far stronger resistance than Peiper had bargained for. The two tanks that fired on B Battery were under the command of SS Lieutenant Werner Sternebeck. He had lost five of his seven tanks in the advance. Peiper, it seems, was furious at yet more delays to his advance. 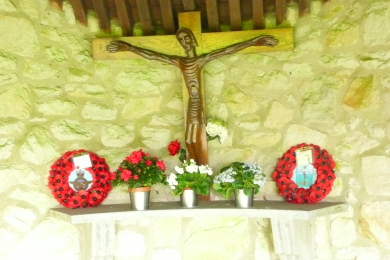 Clearly outgunned by the Germans, the men from B Battery surrendered after Sternebeck's attack. Peiper himself went to the Baugnez Crossroads and brusquely ordered Sternebeck to move on. The 113 American prisoners-of-war who had survived the attack were assembled in a field near the Café Bodarwé at the crossroads - this figure included eight Americans who had already been captured by Peiper. A young Belgium boy witnessed what happened next.

At about 14.15, soldiers from the 1st SS Panzer Division opened fire on the 113 men who were in the field. The firing stopped at about 14.30. Soldiers from Peiper's unit went around the field and shot at close range anyone who seemed to be alive - or clubbed them to death as later autopsies showed. Incredibly, some prisoners did get away after feigning death. It was three of these escapees that came across Pergrin.

Colonel Pergrin had heard the attack by Sternebeck and went to investigate, first in a jeep and then on foot. Near Five Points, three Americans rushed up to Pergrin. It was these men who first alerted the Americans that something had gone on at the crossroads. Pergrin took the wounded men to Malmédy and at 16.40 contacted the First Army's headquarters to inform them that some sort of massacre had taken place at Five Points.

Because of the nature of the battle, no one side could claim the land that the dead men lay in. It was only from January 14th,  that the Americans could lay claim to the area around the crossroads and claim the bodies. 71 snow-covered bodies were recovered. The freezing weather had done a lot to preserve the bodies and that made the autopsies easier, especially as some had been covered in snow.

On December 17th, 21 survivors of the massacre made statements to the American authorities in Malmédy. Their accounts were remarkably similar despite the fact that they had had little time to discuss their experiences.

When the massacre took place, Peiper had left the area around Five Points and had moved on. He was not at the scene when the shooting started. However, on December 12th, it is said that Hitler had issued an order which stated that no prisoners were to be taken and that a "wave of terror" was to descend on the Allies who stood in the way of the offensive. However, in the trial at Dachau no written evidence was produced to substantiate this and, as evidence, the court ignored it. Also Peiper's men had taken prisoners in their advance prior to the Malmédy incident. So what happened? 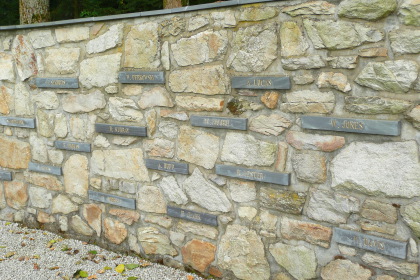 Names of those murdered at Malmedy

The sheer number of prisoners almost certainly sealed the fate of the Americans. Over 100 prisoners could not be left where they were - in the field. But there was no spare capacity for the Germans to guard them as Peiper had ordered the SS units under his command to speed up their advance. They could not be sent marching back towards the German lines as Peiper only had control of one main road and his unit was using it. Any men marching in the opposite direction could easily clog up the road. Peiper's other worry was that he might be attacked by American units known to be in the area.

Two theories have been put forward to explain what happened.

The men were deliberately murdered in cold blood. Certainly, the 1st SS Panzer Division had been responsible for atrocities in Russia and they had already shot captured Americans in their advance in the Ardennes Offensive - and more were shot after Malmédy. It is possible that Major Werner Poetschke, who commanded the 1st SS Panzer Battalion, gave the order - but no evidence has proved this, just rumour.

Another theory put forward is that some Americans tried to escape and were fired on by the Germans. Other Germans heard the firing, but were not aware that the targets were three Americans as opposed to all of the group. Either trigger-happy or simply battle-hardened, they opened fire on the group as a whole. In October 1945, an American soldier made a sworn testimony that he had escaped with two other men (who were killed) but he had survived and made it back to US lines. The law as it stood then would have allowed the Germans to shoot at escaping prisoners - but not at the whole group. It is possible that their escape precipitated the shooting of the other men.