It was not until 1922 that plans to provide a city war memorial for Manchester moved forward. The Manchester branch of the British Legion initiated the project. Ernest Simon, the serving Lord Mayor, established a war memorial committee with representatives from different military associations, the business community and the council.

A subscription was opened and quickly raised some £10,000, the maximum sum it had been agreed to spend on a monument. In a city where unemployment was increasing, prospective subscribers were informed that work associated with the memorial would benefit local firms. Controversy, however, soon engulfed the memorial scheme. Identifying 'the best available site' for the memorial proved problematic.

Initially, the war memorial committee considered three possible sites: Albert Square, Piccadilly and St Peter's Square. The favoured site was Albert Square, the city's principal civic space, where it was proposed to remove all of the existing statuary, including the Albert Memorial, so that the new memorial would stand alone, a powerful expression of the community's loss.

The committee moved quickly, approaching the King, who indicated that he had no objection to the removal of his German grandfather's memorial from the square. The Albert Square site was also strongly favoured by the British Legion. But, perhaps anticipating opposition to this location, the committee also considered St Peter's Square as an alternative site; the Lord Mayor stating that they had also obtained the consent of the Bishop of Manchester and the trustees of St Peter's for the removal of the cross.

The articles and letters which appeared in the local newspapers following the announcement of Albert Square as the unanimous recommendation of the war memorial committee suggested that many Mancunians did not share the committee's view, especially when it would involve the removal of all the statues.

The Manchester Art Federation, which included the Manchester Society of Architects and Manchester School of Art, led the protests. Opposition also came from the Royal Manchester Institution which argued that the proposed removal of the statues represented a breaking of the 'sacred trust' with those who had provided them.

The Manchester sculptor, John Cassidy, also doubted whether Albert Square was the best available site. When the city council came to debate the issue, the arguments against moving the statues had been well rehearsed and it was the Piccadilly site that emerged - by a vote of 71 to 30 - as the favoured location.

The proposal that only the Albert Memorial would be removed to make way for the war memorial was also defeated. Placing the memorial in Piccadilly - in the open space created by the demolition of the Infirmary - found particular support from members of the Art Gallery Committee who envisaged the memorial standing in front of' the art gallery that the city council intended to build there.

But uncertainties still surrounded the plans for Piccadilly, and, in May 1923, the war memorial committee anxious to see the memorial scheme move forward, agreed to site it in St Peter's Square. It was understood that in order to make the necessary space for the war memorial that Temple Moore's memorial cross would be removed from the square. But the suitability of the St Peter's Square site, selected, as one correspondent to the Manchester Guardian put it, 'more or less casually by a number of laymen, acting in a spirit of compromise', continued to be questioned.

One of the concerns remained that although St Peter's Square was a central location it was very close to the city's theatre and cinema district. The selection of the design of the memorial also proved contentious. The importance of organising an open competition for such an important memorial had been emphasised by the Manchester Art Federation and the Royal Society of British Sculptors during the discussions over the site.

The war memorial committee appeared to agree, appointing the Manchester architect, Percy Worthington, as the assessor. However, controversy erupted when it was announced that the committee was unwilling to leave the decision entirely to Worthington, reserving the right to overturn his selection. The announcement of this decision prompted an understandable reaction from architects and their professional association. The decision was debated in the local press, correspondents expressing their surprise and bewilderment over the committee's apparent arbitrary and arrogant stance.

The Manchester Guardian turned to Charles Reilly, Professor of Architecture at Liverpool University, to explain the principles at issue to its readers.

Paul Waterhouse, the son of Alfred Waterhouse, who had recently served as President of the Royal Institute of British Architects, regretted the deadlock whilst suggesting that he knew much more about the committee's internal conflict but would not betray confidences. The Lord Mayor, William Cundiff, was equally diplomatic, referring to 'certain insuperable difficulties' within the committee whilst confirming that it was to go ahead and select its own designer.

A sub committee was appointed and instructed to approach an architect 'who can be trusted to prepare a suitable design.' That architect was Sir Edwin Lutyens. Lutyen's design was a cenotaph, and as with the majority of those he produced for other provincial towns (including Rochdale), the essential elements of the London cenotaph could be recognised.

It was a simple, well proportioned undenominational shrine in Portland stone, with a central pylon surmounted by the Unknown Soldier. The elegance and restraint of the lettering was a noteworthy feature of the design. It represented 'the triumphant end of the war as well as the sadness and sorrow it entailed.' But not all those who studied the proposed design felt that it was an entirely appropriate monument. Some reacted to its modernity; others even doubted the validity of any formal memorial.

One correspondent writing to The Builder argued for a simple open space. 'Surely the creation of some fine square or some much- needed street widening would be a more fitting memorial of the recent war than any monolith, which, after all, can never convey the magnitude of the debt the city owes to its brave dead. The dedication of the Old Infirmary site to be a permanent open square would be an admirable thing, and in the future it will be of greater value as an open space than it can ever be if built upon.'

But after these extraordinary debates and arguments the project finally went ahead. By the early summer of 1924 Manchester's cenotaph was nearing completion. The intention to provide work for local men appears not to have been realised as Lutyens used the London-based Nine Elms Stone Masonry Works to erect the memorial. In all, it cost £6,490, the residual funds being used to provide beds in local hospitals for the families of servicemen.

The unveiling ceremony in July 1924 was an occasion of dignified remembrance. No part of the ceremony was more significant than the unveiling itself which was carried out by the Earl of Derby and Mrs Bingle - 'a citizen of the working-class district of Ancoats ' - whose three sons had died in the war.

The memorial was dedicated by Rev J. G. McCormick, the Dean of Manchester. Manchester's cenotaph was generally welcomed. Henry Cadness, a Manchester artist, acknowledged its simple beauty and dignity, providing 'an environment of consolation which will be ever sacred for all.' But it could not have gone unnoticed in the packed square that some people's view of the ceremony was obscured by the presence of Temple Moore's cross.

Negotiations to remove it recommenced after the ceremony but the trustees were reluctant to do so. The issue was a delicate one and after some further discussion Lutyens effectively closed the matter by stating that because of the 'susceptibilities of the donors ' he did not object to the cross remaining.

But however appropriate Lutyens' cenotaph was, there still remained uneasiness about the suitability of the site, an uneasiness evident in 1925 when renewed discussions about the city art gallery were broadened to include the question of moving the cenotaph to Piccadilly. But no action was taken and the cenotaph was to remain in St Peter's Square.

In 2011 Town hall chiefs wanted to move the 87-year-old monument – which commemorates the city’s thousands of war dead – from its home in historic St Peter’s Square do have the second Crossing of the Metrolink.   This was completed for Remembrance Sunday 2014. 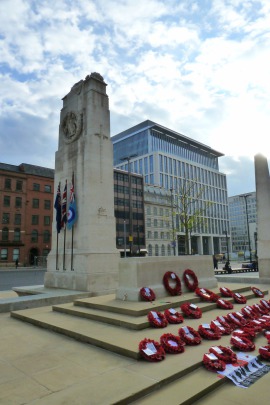 The Salford Cenotaph on the Crescent (outside the old Police and fire Station) is surmounted by the sphinx of the Lancashire Fusiliers. The sphinx is on pedestal on which is carved the single word EGYPT. The Rose of Lancaster decorates each corner at the top of the cenotaph. The side panels feature a large carved wreath and the names of campaigns in which the regiment took part.

Salford lost some 5,000 men from the eleven battalions it provided for the Lancashire Fusiliers in the First World War. The raising of a memorial to honour the dead was carried out by a committee chaired by Colonel A. J. Bailey. The appeal for funds was for both a war memorial and to provide assistance to wounded soldiers and the dependents of those who had died.

In all some £5,000 was raised, leaving, after the costs of the memorial had been paid, £3,275 for the Lancashire Fusiliers Compassionate Fund. The memorial, in the form of a cenotaph, was designed by the long established Manchester firm, J. and H. Patteson. The selection of a suitable site proved difficult and several sites were rejected - some in the city's principal parks - before Albion Place on the Crescent was settled upon.

The memorial was unveiled by the Earl of Derby in July 1922. In his speech he emphasised the 'spirit of Lancashire' exemplified in those men who had who had enlisted and fought. The Lancashire Fusiliers' Roll of Honour contained 13,549 names. Sir Montague Barlow MP handed over the memorial to the Mayor of Salford.

The regiment's enormous losses were also remembered in the memorial, designed by Lutyens, in Bury. In the mid-1980s there was discussion about moving the memorial to Swinton, in part because of plans to convert the fire station into an exhibition centre. In the end the memorial was left, but the area around it, which had become used for car parking, was landscaped to both protect and preserve the dignity of the memorial. 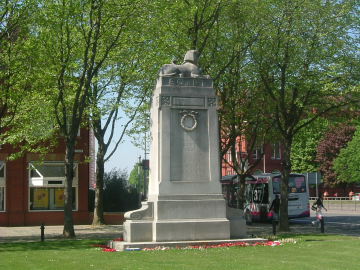