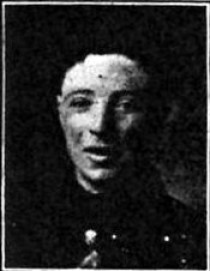 There is an odd connection with the Sparrows and The Preens that entwine over the decades.  Church Preen is a small hamlet near Church Stretton - and I assume this is where Herbert's side of my family took their name from.  There is a large English manor house and hall in Church Preen, not surprisingly Called "Preen Hall".  Whilst looking at the list of owners of Preen Hall when I visited the place, the name of Sparrow came across many times as owners.  So some centuries before the Sparrow and Preen family connection was apparent.

After working for Mr. Hanbury-Sparrow, Herbert worked on the railways for the L & NW railway (London and north Western Railway) at Abergavenny in Wales - he was the Head Brakeman.

Britain declared war on Germany on 4th August 1914 - less than two weeks later Herbert had joined the 1/3rd Monmouthshires - until recently it had been a puzzle why Herbert had joined the Monmouthshires (having lived some distance away in Shropshire - but now I have found out he worked in the area, joining with his "Pals" on the railways seems logical.  Herbert served with the BEF (British Expeditionary Force) in France from January 1915.  He was promoted to Sgt in November 1915.

The Monmouthshire Regiment had been formed in 1908 as the Territorial Army unit for the county and was made up of three Battalions drawn from different areas of the county.  Abergavenny was the headquarters of the 3rd Battalion (“3rd Mons”) which included two companies from Abertillery, one each from Blaina, Sirhowy, Tredegar, Ebbw Vale and Cwm and one company from Abergavenny.

War broke out on August 4th 1914 and the order to mobilise the 3rd Mons was received at 6.10 p.m. on the same day.  Throughout the night of the 4th, the companies from the various towns and villages mustered and caught trains to Abergavenny and the whole battalion gathered outside the Market Hall at dawn on August 5th.  Later, they marched on to Bailey Park, where they were given tea.

Late that night, the battalion travelled by train to Pembroke Dock where they joined up with the rest of the Welsh Border Brigade - the 1st and 2nd Battalions of the Monmouthshire Regiment and the 1st Herefords.  They stayed at Pembroke Dock for four days before being moved to Oswestry to complete their training.  By August 31st, the whole brigade had been billeted in Northampton.

On the morning of December 19th, the chateau and canal came under heavy shell fire followed closely by a gas attack.  All four companies moved into the trenches to reinforce the front line against the expected German attack.  The attack never came but the battalion was shelled all day and all the following night and had 40 men killed or wounded.  Lance-Corporal Dixon and Private Moore were later awarded the D.C.M. for rescuing wounded men and bringing them in through wrecked trenches and over the rickety wooden bridges across the canal.

On December 27th, the battalion was taken out of the front line and received orders to leave the Yser Canal.  At 2.30 p.m. on December 29th, the whole battalion paraded in the grounds of Elverdinghe Chateau prior to moving out.  As the men fell in, "an ominous sound was heard, like an oncoming railway train" and 17 inch shells began to burst among the ranks.  In a few seconds, 39 men were killed and 30 wounded.  Among the dead were many of the men who had survived the slaughter of Ypres. Herbert William Preen was one of those 39 killed by the German shell attack.  Herbert was 23 when he died.

His Commanding Officer, Captain L.D. Whitehead wrote: That they (the 1/3rd) had been four months without a casualty.  Then in the last hour at camp before leaving for a month's rest the Germans had fired 4 large shells.  Causing 71 Casualties.  Sadly Herbert was one of those Casualties and suffered terrible head wounds.  He died a few hours later without ever regaining consciousness. Herbert was laid to rest at Ferme Oliver CWGC in Belgium.

Finding information and details of Herbert became a quest for me.  I had my first chance to see his Grave as I travelled to The Somme.  The Cemetery is just outside Ypres and on the way down towards the V2 sites we visited.

Below are pictures of me laying flowers that I had brought from Manchester at Herbert's Grave.  It was pleasing to see that (as always) the CWGC had kept the Cemetery immaculate.  Herbert was buried with his friends who died that day in December 1915.

Like Kevin before me when he visited Tommy Stubbs Grave in Holland it was a moving and proud moment for Steve.

Not content with just visiting Herbert's Grave near Ypres, I had to visit his birth town and the place where he grew up.  I had to see the War Memorial with his name on.

Church Stretton is in Shropshire - the country where my Mum's family come from on her mum's side.  They were based around Ironbridge, Church Stretton and the small villages around like Church Preen and All Stretton.

Below are the two memorials where Herbert is mention.  The top one with the cross is the main one in Church Stretton and his name is listed on the granite block the cross is raised upon, a picture of his name surrounded by poppies is below too.  I went the weekend after Remembrance Sunday.

The bottom two pictures are of the memorial at All Stretton, the little hamlet where Herbert lived (Church Stretton is about 2 miles away and is the main town).

Sadly the memorial is in stark contrast to the care that Church Stretton's (or 99% of the countries memorials are)  It was a forgotten memorial, no flowers, no poppies and little care. 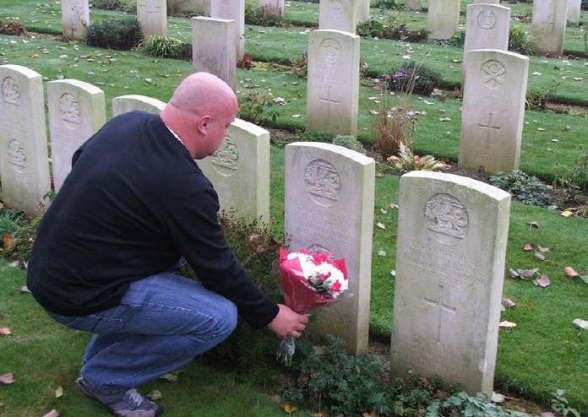 Below is the last letter Herbert ever wrote home.

The letter was written to his sisters - Flo (Florence, my Great Great aunt) and "Ciss" (the nick name he gave my Great Grandmother)

Below is a transcript of his last letter home.....

My dear Flo and Ciss

I hope that this will find you both in the best of health as this leaves me.

I have been having a pretty hairy time as the Germans have been using gas - but they had a warmer time than they expected!

We are on our way from the front for a good rest, so I will be able to write to you often.  Not heard from Will neither from Leon (This is Leonard, My Great Grandfather - who also was serving at Ypres and died as a result of being gassed by the Germans - although he died some years after the war because of the complications the gas attack had on his lungs.) but I presume that they are both keeping well.  I will write to them as I have their address.

I have just received your letters, thanks very much for the cards and also the good wishes.  I hope that you both have a happy new year.  What sort of xmas did you have?  I expect it was very quiet with everyone around Ironbridge (The part of Shropshire where he lived) but hope it will be over by next xmas.

Please remember me to Mr. & Mrs. Wright and Mr. & Mrs. Jones and all at home and to Patty and her husband.  I have not heard from them.

It is a lovely day today - it does not seem like xmas weather.  I hope that it will continue fine for the sake of those who have taken our place in the line (front line).

I hope that little Gwennie and babs are both well and give them my love.

I don't think I have anymore for this letter, so I will close with my dearest love to the both of you.  I will close.  I remain your ever loving Brother.

I visited Herbert's Grave again in 2013, and like the first time I felt a sense of loss, sadness and anger that Herbert was one of the millions of men who died in a war that unlike the fight against Fascism in WWII, he died in a war that was just about egos of countries.

Many Thanks to Martyn Gibson for his help and support on finding information relating to Herbert. 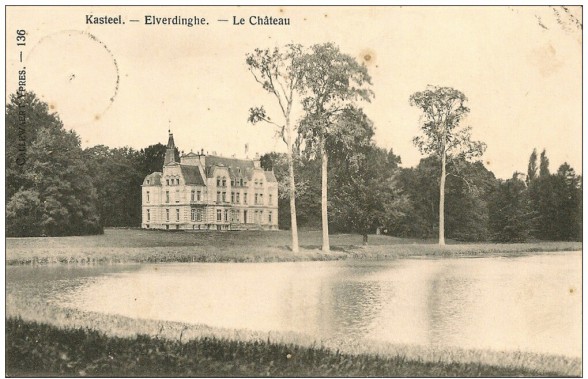