The Gite that we were staying at was wonderful and it was right slap bang in the middle of the Ancre Valley – ideal for places such as Beaumont, Authuille and Aveluy.  We were actually staying in Beaucourt sur Ancre in a Gite on Rue d’en Haut (D163 to Beaumont Hamel), just off the D50, the main road North from Albert.

Zivy Crater was one of two mine craters (the other being Lichfield Crater) which were used by the Canadian Corps Burial Officer in 1917 for the burial of bodies found on the Vimy battlefield. The numerous groups of graves made about this time by the Canadians were not named as a rule, but serially lettered and numbered; the original name for Zivy Crater was CB 1.

The crater is essentially a mass graves and contains 53 First World War burials, five of them unidentified. The names of the men buried in the crater, all of whom died in April or May 1917, are inscribed on panels fixed to the boundary wall. 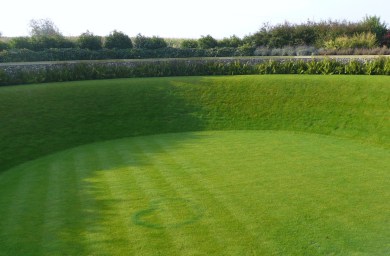 Vimy Ridge’s Canadian memorial is outstandingly beautiful.  It is a memorial to Canadians and something Canadians should be utterly proud of.

Something else that Canadians should be proud of is the guides at Vimy Ridge and at other Canadian sites.  Many are History students in gap years and they represent Canada with intelligence, dignity and warmth. We have written to them in the past for help and for guarantees sites would be opened and they are wonderful.

Many people consider the Canadian victory at Vimy a defining moment for Canada, when the country broke free from the yokel of Empire and that the Canadian troops also earned a reputation as formidable, effective troops because of the stunning success. But, similar to The First day of The Somme Canada faced a terrible cost, with more than 10,000 killed and wounded.

The Canadian Corps was ordered to seize Vimy Ridge in April 1917. Situated in northern France, the heavily-fortified seven-kilometre ridge held a commanding view over the Allied lines. The Canadians would be assaulting over an open graveyard since previous French attacks had failed with over 100,000 casualties.

To capture this difficult position, the Canadians would carefully plan and rehearse their attack. To provide greater flexibility and firepower in battle, the infantry were given specialist roles as machine-gunners, rifle-men and grenade-throwers. These same soldiers underwent weeks of training behind the lines using models to represent the battlefield, and new maps crafted from aerial photographs to guide their way. To bring men forward safely for the assault, engineers dug deep tunnels from the rear to the front.

Despite this training and preparation, the key to victory would be a devastating artillery barrage that would not only isolate enemy trenches, but provide a moving wall of high explosives and shrapnel to force the Germans to stay in their deep dugouts and away from their machine-guns. "Chaps, you shall go over exactly like a railroad train, on time, or you shall be annihilated," warned Canadian Corps commander Sir Julian Byng.

Attacking together for the first time, the four Canadian divisions stormed the ridge at 5:30am on 9 April 1917. More than 15,000 Canadian infantry overran the Germans all along the front. Incredible bravery and discipline allowed the infantry to continue moving forward under heavy fire.  Even when they saw their officers being killed there were countless acts of sacrifice, as Canadians single-handedly charged machine-gun nests or forced the surrender of Germans in protective dugouts. Hill 145, the highest and most important feature of the Ridge, and where the Vimy monument now stands, was captured in a frontal bayonet charge against machine-gun positions.

Three more days of costly battle delivered final victory. The Canadian operation was an important success, even if the larger British and French offensive, of which it had been a part, had failed. But it was victory at a heavy cost: 3,598 Canadians were killed and another 7,000 wounded. 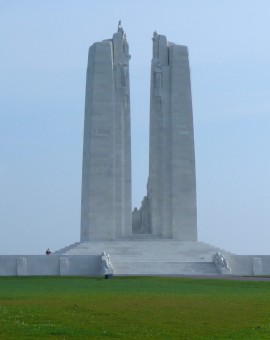 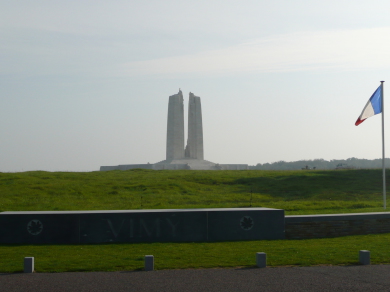 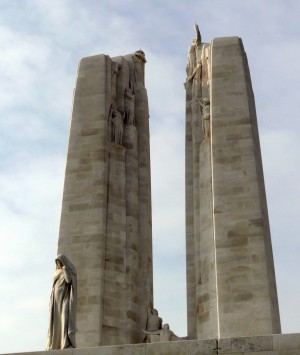 Following an extensive multi-year restoration, Queen Elizabeth II rededicated the memorial on 9 April 2007 during a ceremony commemorating the 90th anniversary of the battle. The memorial site is one of two National Historic Sites of Canada located outside of Canada and is maintained by Veterans Affairs Canada (the other is the Beaumont-Hamel Newfoundland Memorial).

Verdun is to the French that The Somme or Ypres is to the British.  The Battles of Artois were as costly in French lives as the better-known Battle of Verdun. As with numerous other sites across France, Notre Dame de Lorette became a national necropolis, sacred ground containing the graves of French and Colonial fallen, as well as an ossuary, containing the bones of those whose names were not marked.

Notre Dame de Lorette, also known as Ablain St.-Nazaire French Military Cemetery, is the world's largest French military cemetery.  It is the name of a ridge, basilica, and French national cemetery northwest of Arras at the village of Ablain-Saint-Nazaire.

The high point of the hump-backed ridge stands 165 metres high and - with Vimy Ridge - utterly dominates the otherwise flat Douai plain and the town of Arras. When we were there some French Military veterans were making sure that the Cemetery was in good order. 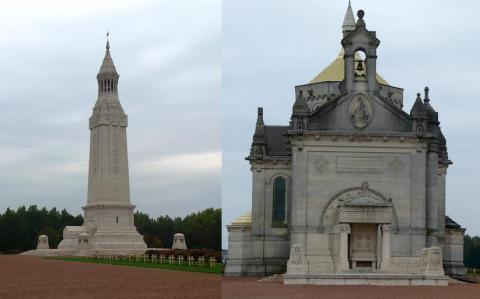 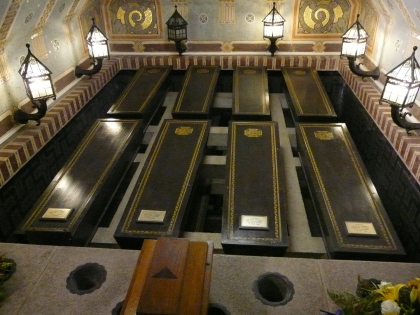 One of my proudest achievements with the NMBS is having some of my photographs published or used by other people, organisations and groups.  The province of Ontario asked for use of a picture that I took relating to the grave of an unknown Canadian soldier. The picture was from Cabaret Rouge British Cemetery.

A focal point for remembrance, he represents more than 116,000 Canadians who lost their lives during the First World War. A headstone in plot 8, Row E, Grave 7 marks his original grave.

Caberet Rouge was a small, red-bricked, red-tiled café that stood close to this site in the early days of the First World War. The café was destroyed by shellfire in March 1915 but it gave its unusual name to this sector and to a communication trench that led troops up the front-line. Commonwealth soldiers began burying their fallen comrades here in March 1916. The cemetery was used mostly by the 47th (London) Division and the Canadian Corps until August 1917 and by different fighting units until September 1918.

It was greatly enlarged in the years after the war when as many as 7,000 graves were concentrated here from over 100 other cemeteries in the area. For much of the twentieth century, Cabaret Rouge served as one of a small number of ‘open cemeteries’ at which the remains of fallen servicemen newly discovered in the region were buried. Today the cemetery contains over 7,650 burials of the First World War, over half of which remain unidentified. 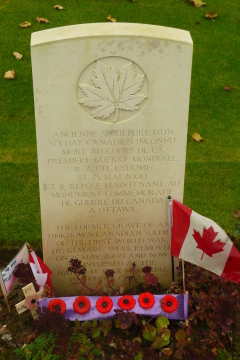 The hamlet of La Targette in the parish of Neuville-Saint-Vaast is home to the French National Cemetery and La Targette British Cemetery. The rigid lines of crosses in the French war cemetery contrast markedly with the landscaped tranquillity of its British counterpart, which also houses two elegant Indian-style mausoleums. The French one is enormous and the crosses make optical illusions when you look from the cemetery gates.

Situated on the Arras to Lens road (D937), the village of Neuville-Saint-Vaast was the theatre for some intense fighting in 1915 and again in 1917. Close by is the memorial Monument de Flambeau.  The picture of it below (Like the statue of Liberty’s arm) is a reminder of the villages' destruction due to French mining operations in 1915.

La Targette Czechoslovakian Cemetery is located along the road D937 between La Targette-Neuville-Saint-Vaast and Souchez. The D937 is the main road linking Arras to Béthune.

The cemetery was open on the site of the original hamlet of La Targette near Neuville Saint-Vaast to commemorate the offensive of the 10th French Army in Artois on Mai 9, 1915.The Czechoslovakian soldiers buried in La Targette were volunteers who lived in France and abroad and enlisted in the Czechoslovakian section of the French Foreign Legion to free their country from the hegemony of the Austro-Hungarian Empire.

250 men enlisted as soon as August 22, 1914 into the Nazdar Company, the first Czechoslovakian unit to fight under the French flag.The name Nazdar comes from the company’s battle cry meaning Hello.In the years that followed the company grew into 150000 Czech and Slovak volunteers coming from all around the world.

The Czechoslovakian soldiers of the Nazdar Company were part of the 2nd Infantry Regiment of the 1st Regiment of the French Foreign Legion involved in the assault on Hill 140 on May 9, 1915.Fifty men were killed and 150 wounded of which about twenty died from their injuries.

The Polish Memorial stands opposite the Czechoslovakian Cemetery and Memorial on the other side of the road D937.

About 2000 Polish enlisted in the French Foreign Legion (Légion de Galicie) at the beginning of WWI and fought under the French flag to defend France as many had settled in Artois and worked in the mines around Douai.

This is a newish memorial as The Nazi’s destroyed the original Polish one during WWII. 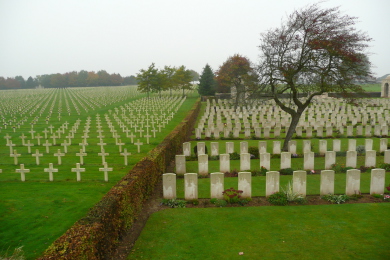 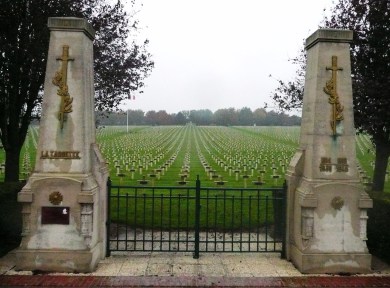