In 2007 saw the NMBS return to The Somme, a place that we had visited in 2001 but had not really done justice and also a place when we split it up with Normandy.  It was also a place where Kevin and Stuart had not been too. This time we decided to use the Lancemobile and drive down to Northern France via the Ferry. We headed to Dover, driving down through the early hours to get a Ferry to France from Dover around 5am.

Just after we returned from Ypres in 2006, I was talking to my mum about it and she said, out of the blue “Oh you have a great uncle buried there”.  Never ever had she mentioned this.  Never ever had I been told.  It’s not like my whole family do not know what I do.

So with a kind bunch of friends who agreed we stopped off about 15 miles from Ypres at Ferne-Ollivers CWGC to pay respects to Herbert Preen, my Great uncle who is buried there.  The after a while of quiet reflection and placing a personal floral tribute on Herbert’s Grave we headed into France.

You can see more about Herbert on a page on this site dedicated to him.

Before we got to the Gite in The Somme we wanted to go to the V2 sites in Northern France.  We aimed to go to Foret d’Eperlecques (Eperlecques Forest) and the Kraftwerk Nordwest KNW - Mannschaftsbunker or The Blockhaus at Eperlecques.  This enormous bunker was constructed by the Germans in 1943 to accommodate; V-2 reception and storage; preparations of rockets for launch in a sheltered and controlled manner; on site production of liquid oxygen; and launch control with two firing pads.

Due to tiredness of being up all night we totally missed this but the NMBS Gods were smiling on us and we some how stumbled on La Coupole. La Coupole is a launch base for V-2 rockets directed against London and southern England, and the earliest known precursor to modern underground missile silos still in existence. Constructed in the side of a disused chalk quarry, the most prominent feature of the complex is an immense concrete dome, to which its modern name refers.

It was built above a network of tunnels housing storage areas, launch facilities and crew quarters. The facility was designed to store a large stockpile of V-2s, warheads and fuel and was intended to launch V-2s on an industrial scale. Dozens of missiles a day were to be fuelled, prepared and launched in rapid sequence against London and southern England. 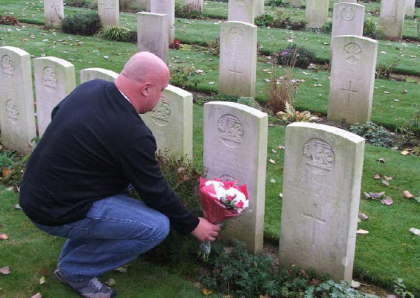 Me at Herbert's Grave 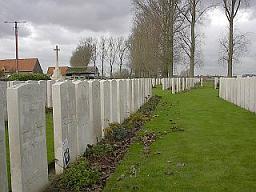 The La Coupole Museum was planned and constructed over a ten year period from 1987 to 1997.

The Wizernes dome was declared an historical site in 1985 by the French government. The museum resides inside and around the old mining quarry where, in 1943, the German Army began work on the second of several giant hardened bunkers, intended for launching 40-50 V2 rockets at London each day.

Inside the museum, the "Historical Centre about the war and development of the rocket," you will now find exhibits that document the German planning and construction of the bunker, the Nazi occupation of France, mans conquest of space, and one example of a surviving A4/V2 rocket.

The Museum is a "Must See" visit - just to see the size of the place.

Although we enjoyed the site, tiredness was creeping in, nodding off in the car in the car park, macho brags about who and who had not hit a "Wall" and hunger - so we headed towards the Somme and our Gite. 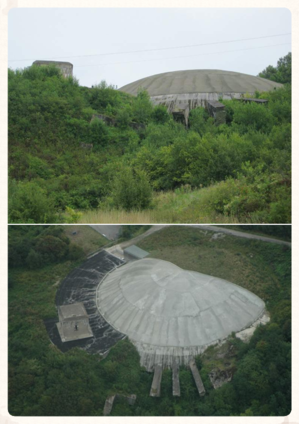 We hit Arras, which is a nice large town.  During the First World War, Arras was near the front and a series of battles were fought around the city, and nearby Vimy Ridge. A series of medieval tunnels beneath the city, linked and greatly expanded by the New Zealand Tunnelling Company, became a decisive factor in the British forces holding the city.

The city, however, was heavily damaged and had to be rebuilt after the war.  In the Second World War, during the invasion of France in May 1940, the town was the focus of a major British counterattack. The town was occupied by the Germans and 240 suspected French Resistance members were executed in the Arras citadel. On 3 September 1944 the town was entered and liberated by the British Guards Armoured Division, 5 years to the day since Britain declared war on Nazi Germany.

The commonwealth section of the Faubourg d'amiens cemetery was begun in March 1916, behind the French military cemetery established earlier. It continued to be used by field ambulances and fighting units until November 1918. The cemetery was enlarged after the armistice when graves were brought in from the battlefields and from two smaller cemeteries in the vicinity.

The cemetery contains over 2,650 commonwealth burials of the First World War, 10 of which are unidentified. The graves in the French military cemetery were removed after the war to other burial grounds and the land they had occupied was used for the construction of the arras memorial and arras flying services memorial.

The adjacent arras memorial commemorates almost 35,000 servicemen from the United Kingdom, South Africa and New Zealand who died in the arras sector between the spring of 1916 and 7 august 1918, the eve of the advance to victory, and have no known grave. The most conspicuous events of this period were the arras offensive of April-may 1917 and the German attack in the spring of 1918.

Canadian and Australian servicemen killed in these operations are commemorated by memorials at Vimy and Villers-Bretonneux. A separate memorial remembers those killed in the battle of Cambrai in 1917.

The adjacent arras flying services memorial commemorates more than 1,000 airmen of the royal naval air service, the royal flying corps, and the royal air force, either by attachment from other arms of the forces of the commonwealth or by original enlistment, who were killed on the whole western front and who have no known grave.