The Somme is festooned with memorials and history, but for me the most poignant is The Thiepval Memorial.  The Thiepval Memorial to the Missing of the Somme bears the names of more than 72,000 officers and men of the United Kingdom and South African forces who died in the Somme sector before 20 March 1918 and have no known grave. Over 90% of those commemorated died between July and November 1916.

The memorial also serves as an Anglo-French Battle Memorial in recognition of the joint nature of the 1916 offensive and a small cemetery containing equal numbers of Commonwealth and French graves lies at the foot of the memorial.

Many of the soldiers buried here are unknown. The British Commonwealth graves have rectangular headstones made of white stone, while the French graves have grey stone crosses. On the British headstones is the inscription "A Soldier of the Great War/ Known unto God". The French crosses bear the single word "Inconnu" ('unknown'). The cemetery's Cross of Sacrifice bears an inscription that acknowledges the joint British and French contributions - That the world may remember the common sacrifice of two and a half million dead, here have been laid side by side Soldiers of France and of the British Empire in eternal comradeship.

The memorial, designed by Sir Edwin Lutyens, was built between 1928 and 1932 and unveiled by the Prince of Wales, in the presence of the President of France, on 1 August 1932 (originally scheduled for 16 May but due to the death of French President Doumer the ceremony was postponed until August).

The dead of other Commonwealth countries, who died on the Somme and have no known graves, are commemorated on national memorials elsewhere.

Here are recorded names of officers and men of the British Armies who fell on the Somme battlefields between July 1915 and March 1918 but to whom the fortune of war denied the known and honoured burial given to their comrades in death.

Over the years since its inauguration, bodies have been regularly discovered on the former battlefield and are sometimes identified through various means. The decision was taken that to protect the integrity of the memorial as one solely for those who are missing or unidentified, that if a body were found and identified the inscription of their name would be removed from the memorial by filling in the inscription with cement.

For those who are found and identified, they are given a funeral with full military honours at a cemetery close to the location at which he was discovered. This practice has resulted in numerous gaps in the lists of names.

On the top of the archway, a French inscription reads: Aux armées Française et Britannique l'Empire Britannique reconnaissant (To the French and British Armies, from the grateful British Empire). Just below this, are carved the years 1914 and 1918. On the upper edges of the side archways, split across left and right, is carved the phrase "The Missing ... of the Somme". 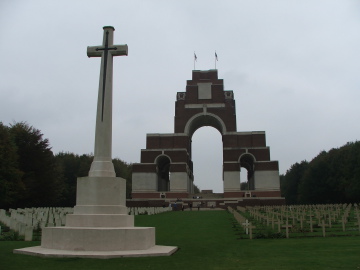 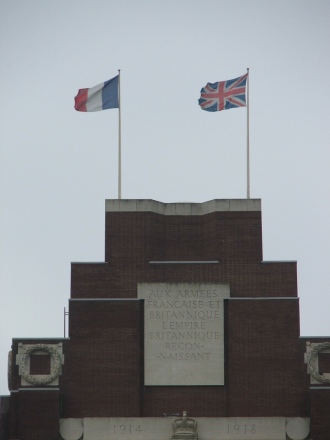 Also included on this memorial are sixteen stone laurel wreaths, inscribed with the names of sub-battles that made up the Battle of the Somme in which the men commemorated at Thiepval fell. The battles so-named are Ancre Heights, Ancre, Albert, High Wood, Delville Wood, Morval, Flers-Courcelette, Pozieres Wood, Bazentin Ridge, Thiepval Ridge, Transloy Ridges, Ginchy, Guillemont

Since we went in 2001 a small Visitor Centre had been built (in 2004). It is located a short distance from the Memorial.  The Visitor Centre welcomes over 150,000 visitors to the Thiepval Memorial to the Missing each year. At the Visitor Centre the memorial is put in the context of the battlefield. Display panels in three languages — English, French and German — provide an overview of the course of the Great War from 1914-1918.

Display panels focus on the events during the Battle of the Somme in 1916 which occurred at the small village of Thiepval and its surroundings.

Three films, each lasting approximately 10 minutes, have been specially compiled covering the subjects of Thiepval, The Battle of the Somme and Memory.

I bought a DVD here about The Somme and the Thiepval memorial, I for the love of god cannot find it at the minute – but it said on the DVD that Salford remembers 1st July as “Thiepval Day”. Being a Salford boy, I was surprised to hear this as it was something I never heard of.  I wrote to a few contacts, which drew a blank also.  It seems (Possible) that for the first few years after the war Salford did remember 1st July as Thiepval day, sadly that stopped (I believe) somewhere between the wars.