Where do we start with our trip to The Netherlands and Germany? Well first, Lance was back after his break to do his Law Degree. But Stuart could not make it, maybe the fear of Formule 1’s or sleeping in fields was it, but he could not come.

First of all we flew via Air Berlin, which was a reasonably good airline and quite cheap at the time a quick check of the site and it seems less budget airline in 2013, also in 2013 Manchester does fewer routes. The problem was that we originally booked to fly to Düsseldorf. We intended to stay the first night in Germany and booked a hotel in Düsseldorf.

Then a few weeks before we were due to fly Air Berlin said that they were no longer flying to Düsseldorf, but we were off to Köln (Cologne). Hence we had to faff about with hotels and find a hotel in Köln, cancel the Düsseldorf one.  I was not happy with this and wrote a letter to Air Berlin. It did the trick they knocked a third off the air-fair.

Earlier in the year, Kevin had decided to take the trip to Germany via Paris. So he got the coach down, usually around this time on year Kevin bangs on about getting his moped down, but the Eurolines coach beckoned. This was a huge mistake as the trip on the coach was long and a nightmare. The trip to Paris was cancelled due to lack of funds, so he went direct to Germany all the way by coach. So a bleary eyed Kevin arrived at Köln half a day before Lance, Gerry and I.

The lodgings that first night were the splendid Hotel Sportzentrum, on the Wilhelm-Ruppert-Strasse in Köln. These lodgings we really quite good and we would recommend them as a short stay place. Hours later a reunion of the NMBS happened at Köln airport and we went back to the lodgings.

We soon showered and changed and found a nice German bar - This pub saw us right for our first night out. We were all starving and despite the kitchen being closed, the landlady or Grundeigentümerin rustled up some goulash and bread. It is called Ägidiust's and it is on Sankt Ägidius Straße and thoroughly recommended. All of us wish to thank the landlady for her kindness and the pity that she took on us.

After a small glass of wine to accompany our goulash we headed back to the lodgings for some rest as we had a long and busy day ahead.  The idea was to go to the Gite via Remagen and the infamous bridge. 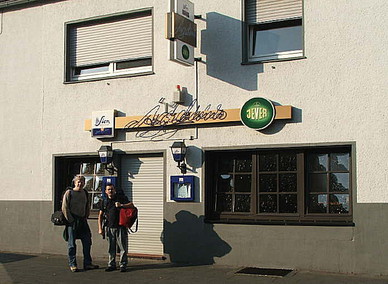 The next Morning we headed off to The Netherlands and Berg en Darl, (where we were going to stay on the trip a quaint little village near Nijmegan (we nicknamed the gaff "The Ponderosa" on the account it looked like a cowboy homestead)

The Ponderosa was on a farm, so the bonus was we bought a tray of two dozen eggs for a few Euros. The main factor was paper thin walls, Kevin and I had to endure nights of duel snoring from the other room.   Before we got to the Ponderosa we made a detour to visit Remagen.

The Ludendorff Bridge was originally built during World War I as a means of moving troops and logistics west over the Rhine to reinforce the Western Front. The bridge was designed by Karl Wiener, an architect from Mannheim. It was 325 metres (1,066 ft) long, had a clearance of 14.8 metres (49 ft) above the normal water level of the Rhine, and its highest point measured 29.25 metres (96.0 ft). The bridge carried two railway tracks and a pedestrian walkway. During World War II, one track was planked over to allow vehicular traffic. The Ludendorff Bridge at Remagen (see pictures in gallery) —the last standing on the Rhine—was captured by soldiers of the U.S. 9th Armored Division on 7 March 1945, during Operation Lumberjack.

On 7 March 1945, soldiers of the 27th Armored Infantry Battalion, led by Lieutenant Karl H. Timmermann, from West Point, Nebraska, approached the bridge, and found it standing. The first American soldier across the bridge was Sergeant Alex Drabik; Lt. Timmermann was the first officer across.

There is a museum housed in the towers of the. It opened in 1980 and tells the story of the bridge and the prison camp, "Golden Mile."

By the time we got to the Ponderosa it was getting late, so I made a large Spaghetti Bolognese and we settled in what was going to be our home for the week, Kevin and I cursing the snoring later that billowed from the bedroom next door.  One sounded like Thor gargling with chainsaws, the other sounded like a wildebeest with a heavy mucus cold. 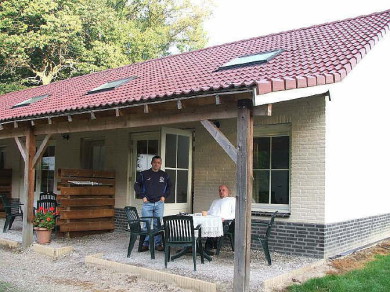 Lance and Steve Outside The Ponderosa

It was a long, busy and straight-forward tour. We followed the route that the advancing Allied army took, starting at Leopoldsburg on the Belgium / Netherlands border and we would end at Arnhem.

By September 1944 the war against the Nazi's looked won. France had been liberated after the D-Day landing in June 1944 and Belgium was being liberated to a line at Antwerp by Field Marshal Bernard Montgomery. The Allies had important ports such as Antwerp, but the Nazi's still held important ports like Dunkirk.

The idea was simple to drop airborne troops by parachute around the Key Bridges are Arnhem, Son, Best, Nijmegan, Eindhoven, Grave and the rail bridge at Oosterbeek.

These bridges formed the basis for the our trip and it is believed that the capture of these bridges would make the war end by December 1944, the failure of Market Garden kept the war going to May 1945 in Europe. What happened, particularly at Arnhem is basically the biggest balls up since the Somme.

But unlike the Somme with the waste and stupidity of war, the Allies faced bad luck, poor planning, good information not being acted on and weather. Otherwise Market Garden would have been an amazing victory. 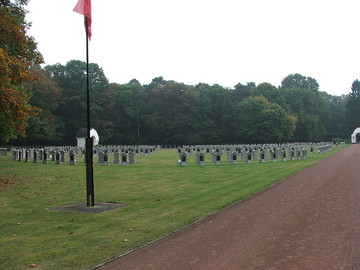 The first port of call was the rough start of “N69” and we visited Leopoldsburg War Cemetery which has burials for British from the start of the war in 1940, there are a number of other nations including Poles and Dutch and next to it is a large Belgium cemetery.   We started the trip up the road at “Joe’s bridge”.

Joe's Bridge is the nickname given to Bridge No.9 on the Maas - Scheldt Canal outside the town of Neerpelt, near the Belgian city of Lommel just south of the Belgian-Dutch border. The bridge was captured by British troops in September 1944, becoming the springboard for the ground offensive of Operation

The original bridge had been destroyed by the Belgian Army in 1940, but the Germans had constructed a wooden Pontoon bridge to the west of it. This bridge was taken on the evening of 10 September 1944 by the Irish Guards under the command of Lieutenant-Colonel John Ormsby Evelyn 'JOE' Vandeleur, hence JOE’s bridge. In the fil "A Bridge too far" he is played by Michael Caine.

The Germans allowed the British Tanks to advance along the road while they waited for the lead elements to move adjacent to them hidden as they were in the wooded areas to the left of the road. They then opened up with anti-tank guns knocked out seven lead tanks, so Lieutenant–Colonel Vandeleur, called in airstrikes from rocket-firing Typhoons. This silenced the guns, and the road was cleared of wreckage by armoured bulldozers, while infantry mopped up, thus setting a pattern for the rest of the advance towards Valkenswaard and Eindhoven. 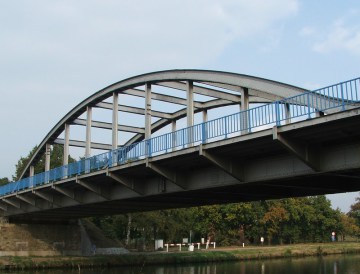 We also visited as we were in the area the Polish Cemetery at Lommel, which is stark but beautifully poignant. The wall at the back of the cemetery lists where the Poles fought in Belgium. Going up the N69 we stopped of for a small cake and a coffee at the Cafe Heertje on the Belgium / Dutch border, opposite is the liberation monument in Valkenswaard. It is an abstract sculpture of granite. Op de achterzijde is een mozaïek aangebracht. The monument was placed opposite  to the pancake house where we had the cake and the coffee by the local family called Suykerbuyck who owned the Pancake house. At the time of the war the cafe was known as the Cafe Rustoord.

The Text on the plaque reads "On this spot the British liberators set foot on Dutch soil for the first time. This statue is a tribute to our liberators and a remembrance of their first contact with the people of Valkenswaard." 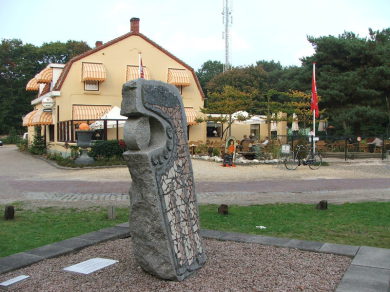 Cafe Heertje and the Valkenswaard memorial

Just a little futher up the N69 is Valkenswaard CWGC.  Valkenswaard was the first village to be liberated on the main line of the British advance into Holland in September 1944.

The cemetery, which lies in a pinewood, contains over 220 graves; almost all of them are those of men who fell in the fighting in the woods around Valkenswaard during that month. All the men buried here belonged to the forces of the United Kingdom. It is right on the N69 and there is a smalll parking layby at the front, but if you are driving you could miss it, so make sure you keep your eyes peeled. You can see at picture in the gallery (Number 1, below)