The Somme was a fitting first tour for the North Manchester Battlefield Society. Many men from Salford and Manchester died in this bloodbath at the beginning of July 1916. So on a chilly February morning in 2001 the first trip of the society commenced.

We decided to travel from Manchester through the night by car. Our aim was to get to Dover and catch the early ferry to Calais. The trip down was long and even though we all worked together at the time it was a bonding session as it was a trip to the unknown. We cut across the Peak District from Manchester towards the M1 and down to London, the M25 and the M20 to Dover. As we drove past Eyam (famous Plague Village) in the Derbyshire Peak District at 2am, a heavy, ice-blue mist surrounded the car as Mike Oldfield's "Tubular Bells" plays on the CD and makes us want to drive faster.  Finally after seemingly driving on the M25 for ever (Half expecting Chris Rea to hit the CD with "Road to Hell") we reach Dover.

At Dover we had hoped that a Tesco's or a Sainsbury's would be open 24 hours for cheap breakfast, but alas, no - so we had to settle for a Burger King. A hearty way to start any trip! The ferry was okay and the crossing nice and calm, and to be honest we have always had great sailings with the ferry and all the companies have been first class, from P&O to DFDS Seaways – who used to be Norfolk Line.  Soon we were in France and the Trip to The Somme was on.

We stayed the first 2 nights at a Formule one (a cheap Travel-lodge) near Arras at a Service station on the main A1/E15 motorway. Formule One Hotel's are a good and cheap way to visit France - they are basic, but clean and cost at the time about £7.50 a night per person (based on 2 sharing a room) When we used them in 2013, it had gone up to about £24 a night per person, still good value if sharing but with the pound dropping like a stone expect more.

The Somme proved to be an amazing place to visit – in hindsight we did make the mistake of splitting this trip with Normandy and the D-Day landings, costing us much needed time to visit all the sights we wanted to see. This mistake was not rectified until the Normandy trip in 2004 and The Somme trip 2007 - when we visited each area for a week each and this is what the NMBS would recommend – a trip to a major battlefield like most the ones we have visited needs a week at least to do it justice.  If you are just paying a quick visit to a relative grave, fine a few days is okay.

The Somme is full of beautiful countryside, but in a way is just one big farm as it is very agricultural, so be aware of mud, farm animals and machinery and without wishing to sound like an old Ministry of Information advert, follow the same rules as the UK’s country code. And seriously be aware of the “Iron Harvest” the NMBS have seen lots on our travels but The Somme has loads and it is always tempting to get a souvenir, but don’t!

In the few days that we had in The Somme the sites that made the list to see included The Thiepval Memorial to the Missing, The Lochnagar Crater at Ovillers-la-Boisselle (see picture with Lance circled), The South African Memorial at Deville Woods, The Newfoundland Memorial Park near Beaumont Hamel and The Museum at Peronne.

One of the nights we stayed in a little hotel room in Albert that was recommended by a helpful and charming girl in Albert's tourist information centre. The hotel was fine but since 2001 you now can book a Formule 1, on the outskirts of Albert. 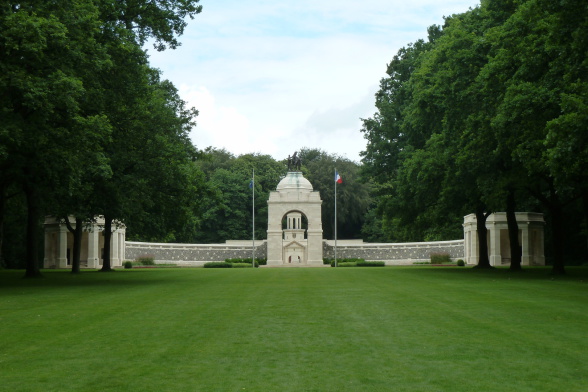 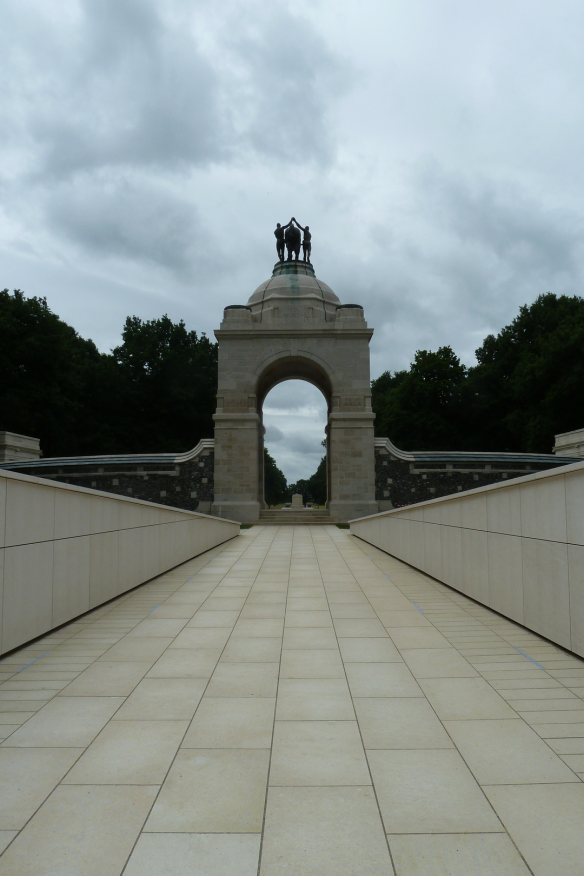 We visited the site of The Beaumont-Hamel Newfoundland Memorial one of the five memorials established in France and Belgium in memory of major actions fought by the 1st Battalion of the Newfoundland Regiment (we will tell you about the others in other parts of this site), the largest is the 74 acre site at Beaumont.

This site commemorates all Newfoundlanders who fought in the Great War, particularly those who have no known grave. The site was officially opened by Field Marshal Earl Haig on June 7, 1925. On a mound, surrounded by rock and shrubs native to Newfoundland, there stands a great bronze caribou, the emblem of the Newfoundland Regiment.

Situated close to the Headquarters dugout of the 88th Brigade, of which the 1st Battalion, Newfoundland Regiment was a part, the Caribou nobly faces in the direction of the former foe, overlooking the trenches and ground across which the Battalion advanced on July 1, 1916. At the base of the mound, three bronze tablets carry the names of 820 members of the Royal Newfoundland Regiment, the Newfoundland Royal Naval Reserve, and the Mercantile Marines who gave their lives in the First World War and have no known grave.

It is said that until the 1960's the park was littered with debris from the war, including such varied items as bully beef tins, tin hats, shell cases and rifles. Evidence for this can be found in photographs of the great pilgrimage of August 1928, where former soldiers were pictured holding such items.

On the first day of the Somme Offensive, an attack was made over this ground towards the German positions by 29th division.

The commander of the division, General Aylmer Hunter-Weston, had a mine blown beyond the so-called 'Y Ravine' (at the bottom of the park) on a curve in the German lines, at 7.20am, some ten minutes before the Somme battle actually commenced.

Unfortunately the early explosion of the 40,600lb ammonal mine, known as the Hawthorn Mine (and which was deliberate) served only to alert the German forces to imminent attack.

Thus the first brigade that went in, the 87th, were immediately cut down, to be followed by the 88th. Every officer who went forward was either killed or wounded. Casualties in the 29th Division alone on 1 July amounted to 223 officers and 5,017 other ranks.

Today the massive crater caused by the mine explosion is readily visible from the park and surrounding areas - it is marked by a large clump of trees. The mine has never been filled in and can be viewed today, although access to the bottom of the crater is tricky. 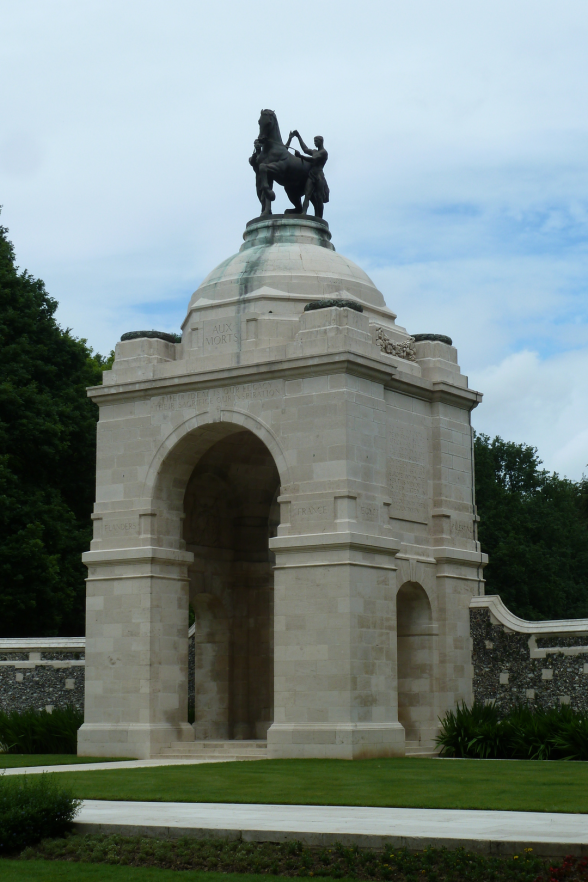 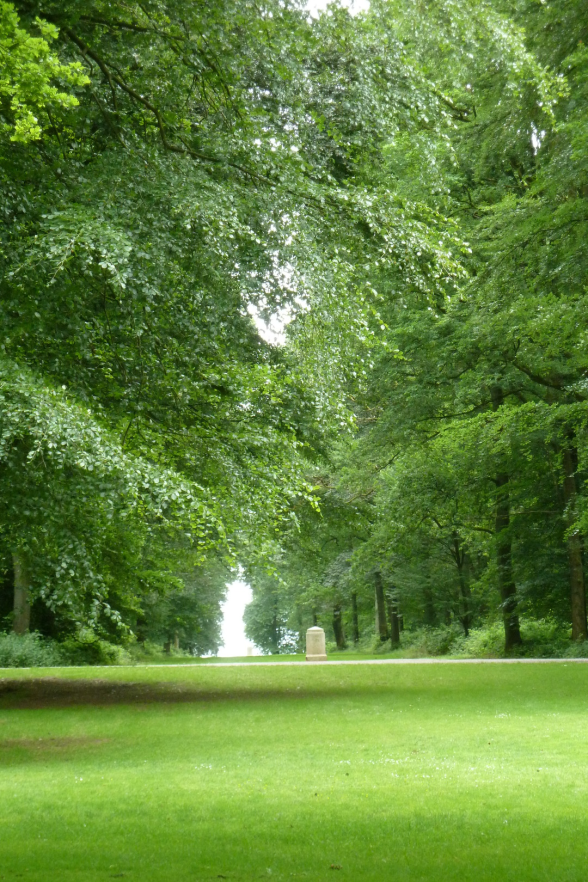 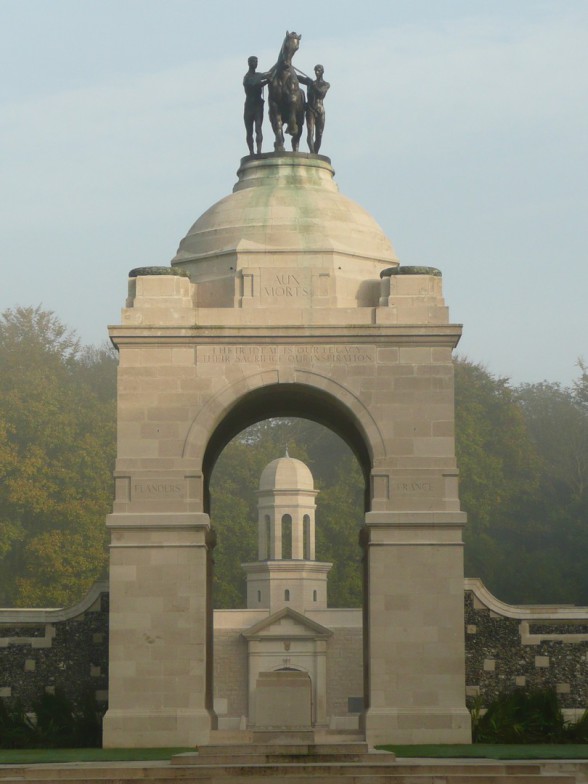 One of the most striking and awe-inspiring sites on the Somme is the Thiepval Memorial to the missing. The memorial is on the site of the old Thiepval village which was destroyed during the fighting on the Somme. The memorial was designed by Sir Edwyn Luytens and was completed in 1932.

The Memorial is 150ft high and totally dominates the surrounding area - it can be seen for miles around. Indeed it is hard to photograph it and get the true sense of scale and the sense of all the names of the fallen that have no known grave that is etched upon the white walls. The memorial contains the names of 72,191 officers and men who were killed. It is a sobering fact that the men listed on this memorial have never been found.

Over the years since its inauguration, bodies have been regularly discovered on the former battlefield and are sometimes identified through various means.

For those who are found and identified, they are given a funeral with full military honours at a cemetery close to the location at which he was discovered. This practice has resulted in numerous gaps in the lists of names.

At the rear of the memorial is an Anglo-Franco cemetery with 300 graves of each. The French are buried on the left - The British on the right.

On the top of the archway, a French inscription reads Aux armées Française et Britannique l'Empire Britannique reconnaissant (To the French and British Armies, from the grateful British Empire). Just below this, are carved the years 1914 and 1918. On the upper edges of the side archways, split across left and right, is carved the phrase "The Missing ... of the Somme".

It is the biggest war memorial to the British and the Commonwealth in the World, and even surpasses the size of the Menin Gate in Ypres.

When NMBS first visited in 2001 it was just the memorial, today a visitor centre is near the memorial and was one of the eagerly anticipated visits of the 2007 tour. It did not disappoint!

After the big sites of Beaumont-Hamel and The Thiepval Memorial seeing smaller and perhaps more personal sites is as equally sobering.  On the main road from Pozieres towards Albert is the large Pozieres CWGC Cemetery.

The Inscription above the gates reads - “In memory to the officers and the men of the Fifth and Fourth Armies who fought at the Somme Battlefields 21st March to 7th August 1918 and to those who have no known grave" 14,669 men have no known grave and the names are listed on the walls of the Cemetery - you can see the walls on the picture of the cemetery below. There are 2,700 headstones many that are "Known unto God".

The fight for Pozieres launched on 23rd July1916 on the Pozieres Ridge on the Albert to Bapaume Road saw the British and Anzac troops try and take the ridge which would give a great advantage as views of the open countryside would be first rate.

The ridge had been intended to be captured on the first day of the Somme (1st July). The Ridge finally fell into Allied hands on 4th August.