Lance, Gerry and myself had visited Verdun some years earlier, since then Kevin and Stuart were subjected to "Ooo at Verdun this" and "Verdun that" - so it was proposed that we pack the bags, and head back.

So in Early October the NMBS stepped on an early train from Manchester and headed to that there London, for a connection to Lille via the Eurostar. A tip to the traveller at St. Pancreas Eurostar... DO NOT BUY THE TOAST.  One round of Toast. I will say again ONE round of toast at £2. I also kid you not that they 50p EXTRA for butter. Gerry and I (being combined with Kevin as the NMBS's "Grumpy old men") talked about it and sighed heavily for hours after. But once aboard the Eurostar and into France it was soon forgotten as we were in the land where bread is so nice even 5 fat lads do not mind eating it with Jam, Butter and Marmite (the Official food product of the NMBS) for breakfast and I tell you now that A stick of nice French bread with none of those preservative things cost no where near £3. Take note Eurostar.

Once into Lille we were in the hire car and heading towards Verdun, which was around a 3 hour trip away. Verdun is a French and German battle, with no sites that are British. The American did fight in the Area, but this was at the Argonne and St. Mihiel (the town where we stayed) But Verdun is etched into French and German history as the Somme or Ypres is to the British.

We finally arrived at St. Mihiel early evening and were greeted by a really kindly, retired couple. The owner was called Madame Burger. The Gite where we stayed was rather grand and was historical. The name of it was Pavilion XVIII ème – and it looked like a very large manor house or villa. Mr & Mrs Burger lived in a manor next to the Gite and the Gite its self was part of the Manor – but separate buildings. I am guessing that a few years ago, around the time of the First World War it was a huge posh place and the Gite were the servants quarters. It was also obviously occupied by the Germans in WWI (there was German graffiti etched in the walls) and although we had no idea you certainly could see the Gestapo in WWII plumbing for the place as it was ideal for them to goosestep about thinking they were regal. Mr & Mrs Burger invited us into their huge home and sat us all down in the dining room.

Mr Burger went out and came back with a drinks trolley – full of Whisky, Gin, Vodka and lager, and offered us a welcome drink. This is the life. After a friendly chat and a tour around their house, they showed us to the Gite. I was gutted that the kitchen was tiny (I believe I am the Gordon Ramsey of the NMBS – even to a point where I have my own sous chef in Kevin) but the place was grand. But the only niggles were, the place was grand but the furniture and fittings were very 1940s / 1950s. Kevin and I had the quarters which were downstairs, next to a barn – and you could see that this could have been the coach (horse and coach, not National Express) driver’s quarters. The beds were both single and Kevin being 6ft 5 and me 6ft 1, they were not long single beds. And the beds mattress was like ye olde thin, with best described as a “Chain mail” support – but it was a bed and a place to get your head down for the night. Stuart (first bags down again) Gerry and Lance were upstairs in the posher bit of the house, away from the riff raff of Kevin and me. The Gite had a nice balcony with room for a table, and 5 chairs – together with a BBQ – ideal place to have a coffee at dusk watching the cosmos go by.

The Gite had a stream running through it, and you could still see where the Horses in the barn/stables would have be brought to drink from the stream. The “Result” of the gite’s locality was that it was 100 metres from a Carrefour Supermarket. Ideal for stocking up on supplies and getting fresh bread each morning. 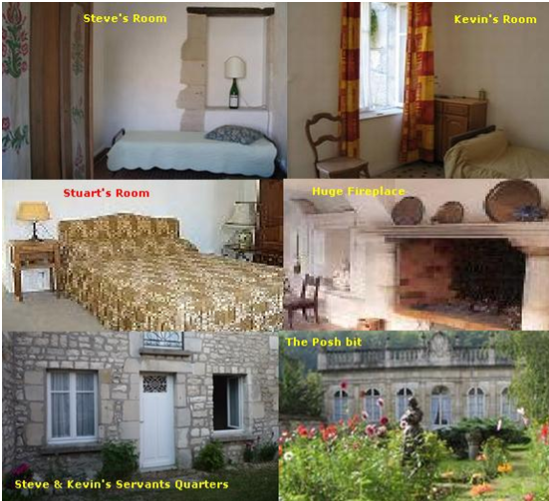 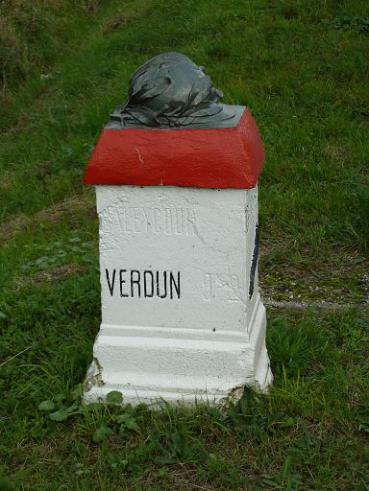