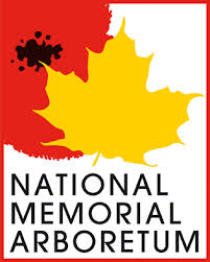 The National Memorial Arboretum is the national site of remembrance, located at Alrewas, near Lichfield, Staffordshire, England. It gives its purpose as:

The National Memorial Arboretum honours the fallen, recognises service and sacrifice and fosters pride in our country. It is a spiritually uplifting place and is emerging as a world-renowned centre for remembrance.

There are nearly 300 memorials for the armed forces, civilian organisations and voluntary bodies who have played a part in serving the country; and even HMS Amethyst's cat. Several corporate war memorials – from British banks, building societies, and insurance companies – have been relocated to the grounds, when the original owners became unable or unwilling to care for them. At the heart of the Arboretum is the Armed Forces Memorial, which is a tribute to over 16,000 service personnel who have lost their lives in conflict or as a result of terrorism since the end of the Second World War. At 11 am on 11 November each year the sun shines through two slits in the outer and inner walls of the memorial, casting a shaft of light across a wreath in the centre.

Within the Arboretum is the Millennium Chapel of Peace and Forgiveness where, at 11 am each day, an act of remembrance takes place. Following the two minutes silence, accompanied by the Last Post and Reveille, there is an introductory talk about the arboretum.