Even though we split the trip with Verdun (and to a small part Waterloo) it felt coming to the Ardennes straight after Verdun was in many ways a good idea. Verdun was intense and so much information in such a short space of time.

The Ardennes was a rest-bite and seeing we only did 24 hrs in the area, it was a fleeting trip.  The Museum at Bastogne is a great museum - including a Huge War memorial (Mardasson) and even a cinema.

When we visited in February 2003, boy was it cold outside with deep snow on the ground.  The sun was out and it was clear skies, but nippy - ironic really as the 16th December 1944 was one of the coldest days on record in the area and the battle was fought as much against the elements as it was the Nazis and this was depicted in the two episodes in the Miniseries, Band of Brothers called “Bastogne” and “The Breaking Point”.

It would be not until 2008 that the NMBS did the whole of The Ardennes and give the Battle of the Bulge the justice that it deserved. 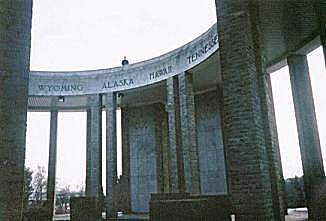 Gerry on the Mardasson Memorial 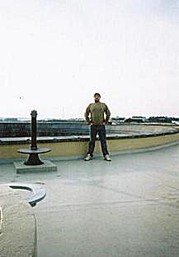 Steve on the Mardasson Memorial

The town of Bastogne was made famous because of the siege of Bastogne - Bastogne had already been liberated and then was surrounded in the Nazi's counter-attack - by the 22nd of December 1944 the town was cut off and American troops were surrounded - The Nazi's sent emissaries to the American commander in the area General McAuliffe, asking the Americans to surrender.

McAuliffe's answer was short, sweet and simple. He replied "Nuts" [to the surrender]. Since then Bastogne has been called "Nuts City". By Boxing Day 1944 General Patton had broken the deadlock and Bastogne was saved.

Although you ask any of the 101st did they need to be saved and they would possibly say “Nuts” to you.

A hidden gem of a museum in the area was the "Ardennen Poteau '44 Museum" which is in Poteau, near St. Vith in Belgium.

The Museum is usually closed during the winter - but a quick email to them and the nice couple that own it opened up for us to visit and give a guided tour.

They have lots of bikes, tanks, half-tacks and Jeeps and is a well presented museum.

We would recommend to either email or phone them before hand if going out of the usual tourist season. As of September 2013 entrance fees for adults are 6 euros, this reduces to 5 Euros for groups of 20 or more.

Click on the picture of them (Below) for The Ardennen Poteau '44 Museum has a very good website and gives you up to date information on the museum, opening hours, fees and a new (from April 2010) part of the museum dedicates itself to the First World War. 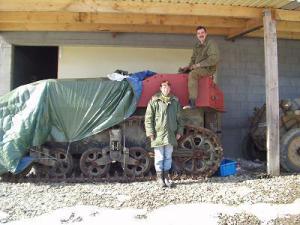