The second phase of the battle began on 4 October. The Americans launched a series of costly frontal assaults that finally began broke through the main German defences between 14-17 October. By the end of October the Americans had advanced ten miles and had finally cleared the Argonne Forest. On their left the French had advanced twenty miles, reaching the Aisne River.

The advance continued during the first eleven days of November. On 6 November the French Fourth Army and the US I corps were approaching Sedan, and the crucial Sedan-Metz railway line came under artillery fire, threatening a key German supply line. There was an element of confusion over which army would get the honour of capturing Sedan which saw the US 1st Division advance towards the city only to ordered to halt to allow the French to take the city, scene of a humiliating defeating during the Franco-Prussian War. The battle only ended with the final armistice, at 11.00 am on 11 November 1918.

The battle became known for the “lost battalion”. During the first phase of the battle, elements of two battalions from the 308th Infantry had become isolated in a steep sided gully between Bois d’Apremont and Charleveaux. The Germans held the ridgeline. From 2 October to 7 October the 650 men of the lost battalion held on against determined German attacks, suffering 450 casualties before they were finally relieved by the advancing 77th Division.

The battle was also noteworthy for the performance of three regiments from the American 93rd Division, manned by black soldiers. These regiments were operating with the French 161st Division, wore French uniforms and used French equipment. The US Army barely used its black regiments, having seemingly forgotten the lessons of the American Civil War where black soldiers had performed very well. In contrast the French had been using African troops throughout the war, and saw the 93rd Division as no different from other American troops. By 28 September all three regiments were heavily engaged in the fighting, taking part in the advance and capturing a series of villages. By the time they were relieved, the three regiments had suffered 2,246 casualties. 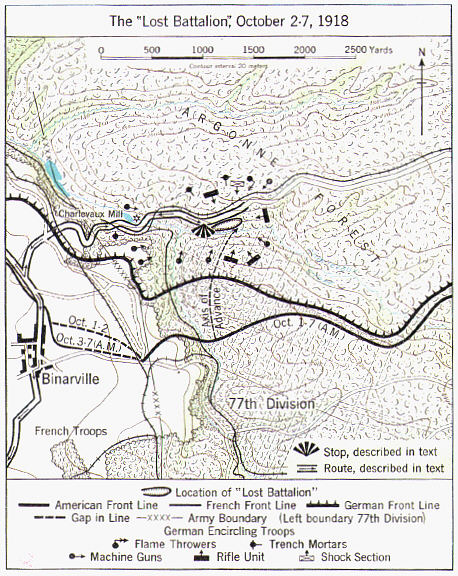 The Meuse-Argonne offensive cost the Americans 117,000 casualties, the French 70,000 and the Germans 100,000. The American casualties represented 40% of their total battlefield losses during the war. Amongst those losses were 48,909 dead. In a dreadful irony, the Spanish Influenza would eventually kill 53,000 American soldiers before the end of the war.

Two Cemeteries in the area show the scale of the American involvement (The German and French Cemeteries are mentioned later) The Muese-Argonne American Cemetery is huge. The cemetery, 130 ½ acres in extent, was established 14 October 1918 by the American Graves Registration Service on terrain captured by the 32nd Infantry Division. The use of the land on which it rests has been granted by the French government free of charge or taxation in perpetuity, as an expression of its gratitude to the United States (the French do this with the CWGC sites and Cemeteries) .

It is located east of the village of Romagne-sous-Montfaucon in Meuse. The cemetery contains the largest number of American military dead in Europe (14,246), The cemetery is generally rectangular in shape with three-quarters of its area devoted to the grave plots and memorial chapel. The memorial chapel is located on the high ground to the south. A grassy east-west entrance mall 600 yards long runs through the small valley across which the cemetery is located separating the graves and memorial area from the Visitors’ Building and service area. There is an impressive entrance portal to the cemetery at each end of the east-west mall and a circular pool with a fountain at the centre. This pool with its goldfish and flowering lilies very tranquil.

A road bordered by a double avenue of beech trees runs from each portal and encircles the mall. A perimeter road encircles the graves area and the service area. Four rectangular grave plots are located on each side of the mall leading from the pool to the memorial chapel. The grave plots are framed by square trimmed linden trees. These trees are especially beautiful in the fall when their leaves are changing colour. Over 65 varieties of evergreen shrubs and trees plus many varieties of flowers complete the tranquil beauty of this cemetery. A stone wall more than 1 ½ miles long encircles the cemetery.

The memorial, a fine example of Romanesque architecture, faces north on the crest of a gently sloping hillside overlooking the graves area. It consists of a memorial chapel and two flanking loggias, on whose walls are engraved the names of those servicemen and women missing in the area and also those missing in northern Russia.

The graves area lies on the southern slope of the valley and is divided into eight rectangular plots lettered from A to H. Each plot is surrounded by square-trimmed linden trees.. The carefully clipped grass of the mall and graves area gives the impression of a vast green velvet carpet. 14,246 War Dead are interred within the cemetery, 486 of whom are Unknowns.

The cemetery contains no multiple burials. Each of the Dead has his own headstone of white marble, a Star of David for those of the Jewish faith and a Latin cross for all others.  The immense array of headstones is arranged in long parallel rows beginning at the east west mall and extends row-on-row to the chapel crowning the ridge overlooking the graves area.