July 1st and beyond.

Contalmaison is roughly about three miles north-east of Albert and we passed it a few times between the Gite and sites we were visiting and the wonderful Maxi-Coop supermarket.  The village was an objective for the 34th Division on the 1st of July 1916, but it took many more days of hard fighting before the 8th and 9th Green Howard’s of the 23rd Division were able to take it at 4.30 p.m. on the 10th of July.

After the village was taken in July 1916, German dugouts in the cellars of the chateau were used as an Advanced Dressing Station (ADS) like the ones at Essex Farm in Ypres.

These dugouts were very impressive to the British; down flights of steps and described as 'marvellous and elaborate'. However, the German advance in March 1918 saw them take the village again, and the cemetery was used briefly once more after Contalmaison was retaken by the British late on the 24th of August 1918.

In the centre of the village next to the church is one of the newer memorials on the Somme Battlefield. This was erected in 2004, to the 16th Royal Scots, also known as McCrae's Battalion. The memorial is made from stone brought here from Scotland, and was constructed by Scottish craftsmen. The bronze panels on the memorial were carved in Kirkwall (Which is on a future NMBS agenda in the Orkneys).

The main bronze plaque on the front of the memorial explains the background to the battalion, which was raised in December 1914 by Sir George McCrae. On the 1st of July, over 250 from the battalion were killed, although men from the battalion did reach Contalmaison around 10.30 a.m.

The Germans however forced them back, and the remnants of the battalion were cut off for three days before relief arrived. After this, Sir George McCrae declared "I was never prouder of my lads than on that day". There are various wonderfully intricate carvings on the bronze panels, depicting trench scenes and the soldiers of the battalion.

The battalion had a strong association with Hearts Football Club, with 13 players from the club being among the first to join up with the 16th Royal Scots. Other professionals from Raith Rovers and Falkirk followed suit. Many supporters of Hearts also joined up, as did fans of Hibernian, the other main Edinburgh football club. But it was Hearts that the battalion is most closely associated with, and a smaller plaque on the memorial is in memory of the 'players, ticket-holders and supporters of Heart of Midlothian Football Club' who advanced on Contalmaison on the 1st of July 1916.

One of the plaques on the memorial also commemorates the 15th Royal Scots, which was also known as the City of Edinburgh Battalion. This battalion was raised in late 1914, and included men from Manchester who had not been allowed to form a 'Manchester Scottish' battalion.

They enlisted in the 15th Royal Scots instead. Nearly 250 men from this battalion were killed on the 1st of July during the attack on Contalmaison.From the village green, leaving the church on your right, the D147 leads south towards Fricourt. Just as the village ends, a small road (the C4) leads uphill off to the left. Another memorial can be seen on the left hand side of this road, a little way up the hill.

This is a memorial to another Victoria Cross winner, Second Lieutenant Donald S Bell, and is a site known as Bell's Redoubt.

The memorial again is fairly recent, having been dedicated on the 9th of July 2000, and it was supported by the Friends of the Green Howard’s Museum and also the Professional Footballers Association. Donald Bell served with the 9th Yorkshires (Green Howard’s), and is reported to be the first professional football player to join up in 1914 (he played for Bradford Park Avenue). He enlisted in the ranks with the West Yorkshires, but in 1915 was commissioned as an officer with the Green Howard’s.

He actually won the V. C. for his actions at Horseshoe Trench, which was about a kilometre west of here, when on the 5th of July 1916, supported by Corporal Colwill and Private Batey, he attacked and destroyed a German machine-gun post. After this, he wrote to his mother modestly suggesting that the success of this attack was 'the biggest fluke alive'. He added 'I believe God is watching over me and it rests with him whether I pull through or not'. Sadly, for this brave man he did not pull through; he was killed, here, when on the 10th of July he undertook a similar brave action, again attacking a machine-gun post.

The bronze cross at the top of the memorial is a reproduction of the original wooden cross placed here by the men of his battalion in his memory. His body was moved in 1920 to Gordon Dump Cemetery, again about a kilometre to the west, and probably very near to where he won his V. C.

The spot where he was killed was named 'Bell's Redoubt', and is marked as such on some trench maps.A little further along the same road, again on the left, is the village civilian cemetery. This is in the same location as it was before the Great War. At least one French soldier who died in the Great War is buried here, and right at the back is another memorial, this time to the 12th Manchester’s. It is set well behind all the civilian graves, except for one tomb just to its right.

The 12th Manchester’s were raised at Ashton-under-Lyme, and had arrived in France in July 1915. The original memorial was a six foot tall cross made of oak with a slightly different inscription: 'To the eternal memory of all those comrades who laid down their lives on the 7th of July 1916'. The cross had been made by an old soldier from the 12th Manchester’s (Ted Thompson) and was originally sited at Mametz Wood and unveiled by Major Browell in August 1927. Browell was one of those who had sailed with the battalion in July 1915 to France. The site at the cemetery was purchased in 1929, and the memorial was replaced by the permanent one that can be seen today. 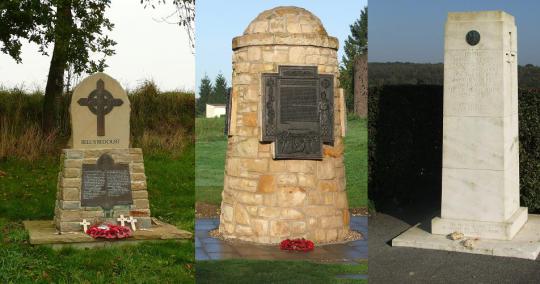 Peronne is without a shadow of a doubt one of the best museums I have visited. The Historical de la Grande Guerre museum and not surprisingly it attracts 80,000 people a year.

The weapons, uniforms and military gear are displayed in the centre of the rooms and are placed in shallow pits on the floor, little bits of home are shown like Oxo tins and Fry’s chocolate and some of the soldiers suffering is emphasized with false arms and legs.

I am not a massive fan of museums as Kevin will vouch for you, I find many museums on the Western front or Normandy for example full of the same from Mannequins to Hitler youth knives, old shell cases to rusty barbed wire, but this is a wonderful museum and here is a link to the site. http://en.historial.org/ 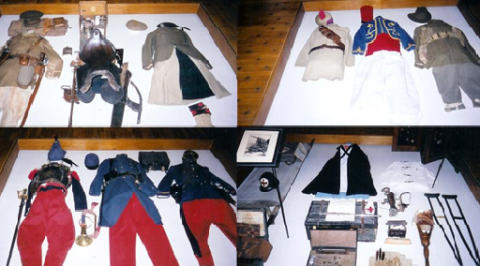