Stuart got married in 2007 and he had his stag do in Newcastle.

Newcastle was fun, and we had a cracking curry there - next morning after a hearty breakfast, Gerry, Lance, Kevin and I decided that on the way back it would be a good idea to visit Hadrian's Wall.

Stuart had groom duties still so he did not go.  We stopped at one of the main sites a place called Vindolanda. Vindolanda is a fascinating Roman fort and settlement lying just to the south of Hadrian's Wall. Recent excavations have uncovered numerous buildings and some of the most unusual and well preserved artefacts from the Roman world. In the superb site museum, set in charming gardens, you can see Roman boots, shoes, armour, jewellery and coins. The place is very well presented. 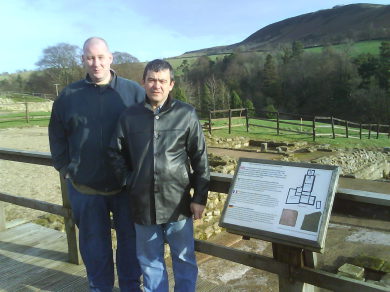 Kevin and Lance at Vindolanda

The main museum, The Chesterholm Museum, has many artefacts and is home to the famous letters to Rome. These are letters written at the time when the wall was populated with a garrison. The Letters show an insight to the life on the wall. The Museum has a nice little tea and cake shop and is well worth a visit.

Vindolanda lies just to the south of Hadrian's Wall and has a very different ‘feel’ to other sites along the Wall. It lies upon the first Roman frontier in the north – The Stanegate Road. You will probably drive along this road to reach the fort and museum. 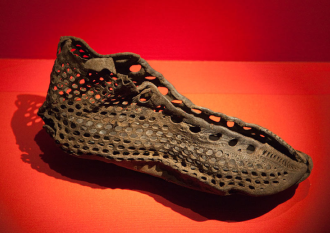 Vindolanda was occupied for over 300 years and was an important frontier fort and village long before the construction of Hadrian's Wall. Indeed, Vindolanda saw nine forts come and go in those three centuries when generations of soldiers and their families called this place home.