After a few years of just passing through Ypres (we visited in 2001 for an hour and a couple of hours in 2003) it was decided that Ypres should get the full NMBS treatment.

Ypres is a wonderful town, a far cry from the death, devastation and destruction that haunted the town for two world wars.  The trip to Ypres was different than in previous years. First we travelled by train to London and then jumped on the Eurostar.

Ypres was also unique as it was the first time that all the current members of NMBS went, so Stuart, Kevin, Gerry, Lance and myself arrived at Ypres just before the Remembrance Sunday weekend 2006.

We arrived at our Gite and were happy with what we saw.  The place was wonderful, Huge converted barn, 7 bedrooms, 3 bathrooms, Massive wood burning fire, duck pond, feral cats, and close to Ypres.  Brilliant and if anyone needs a great Gite in this area contact me and I will let you have details.

Ypres, like the Somme is a by word for carnage and some of the sites that we saw were heart breaking.  From Tyne Cot to Hill 60, each one bears the scars of a bloody war.  Almost everywhere you go in and around Ypres is a reminder to the battles that were fought around this area and the sacrifice that men of all nations endured. 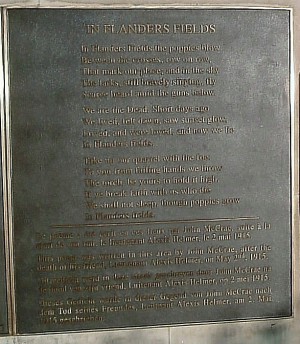 I suppose you could not find a more poignant and ironic start to a trip to Ypres than at the site of the dressing station which sits beside the Commonwealth War Graves Commission's Essex Farm Cemetery.  For this is where The Canadian government has placed a memorial to John McCrae that features "In Flanders Fields", possibly one of the most famous of the WWI “War Poems”.

Though various legends have developed as to the inspiration for the poem, the most commonly held belief is that McCrae wrote "In Flanders Fields" on May 3, 1915, the day after presiding over the funeral and burial of his friend Lieutenant Alex Helmer, who had been killed during the Second Battle of Ypres. The poem was written as he sat upon the back of a medical field ambulance near an advance dressing post at Essex Farm, just north of Ypres.

The poppy, which was a central feature of the poem, grew in great numbers in the spoiled earth of the battlefields and cemeteries of Flanders. McCrae later discarded the poem, but it was saved by a fellow officer and sent in to Punch magazine, which published it later that year.

Essex Farm (and when flooded)

At Essex farm, there is a headstone that is always surrounded by RBL Crosses and wreathes for one very sad reason - the age of the boy who is buried there.

Private Valentine Joe Strudwick of the Rifle Brigade, who was killed in January 1916, aged 15. He was among the youngest soldiers to die in the war Born on 14 February 1900; Valentine was the second of six children of Jesse Strudwick.

In January 1915, aged just 14, Valentine enlisted, joining the 8th Battalion the Rifle Brigade, part of the 14th (Light) Division - the battalion for volunteer soldiers. He was most probably trained at Winchester, and after only a few weeks’ preparation he was sent, with his Battalion, to the trenches at Boezinge near Ypres in Belgium.

Valentine died on 14 January 1916, not in any major battle but in the daily rounds of firing between Germany and the Allies. He was just 15 years, 11 months old. He is buried at Essex Farm and honoured on the Rolls of Honour in Dorking, both St Paul’s and St Martin’s churches, and on the War Memorial in South Street. 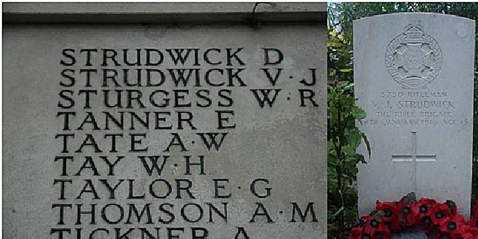 We finished the tour around the Essex farm sites which included a walk around the impressive 49th (West Riding) Division Memorial and apart from being a splendid memorial; there is a family connection for Lance through his in-laws.  The memorial is located immediately behind Essex Farm cemetery on the western Ieper-Ijser canal bank. The 49s served in this sector in 1915.

Next was the close by ‘Yorkshire Trench’.  Back in 1992 a group of amateur archaeologists named “The Diggers” discovered the remains of an original British trench. It was several years later before they really started the hard work.  During 1998 they started and it took 2 years to do what you see today.  The found the trench, obviously but also dug outs and not surprisingly they found 100s of artifacts.

I suppose it was inevitable that they also found remains and the amount even took them by surprise.

They found the remains of 155 soldiers. The casualties that The Diggers discovered were from all nations British, French and German, who were lost in battle and never recovered for seventy years.  The remains were returned to the various organisations that deal with them (CWGC etc) and they were buried with full honours. Sadly out of the 155 only one was ever identified.  He was a French soldier named François Metzinger. He had been serving with the 3rd bis Zouaves de Marche regiment in the French 45th (Algerian) Division. He had come to the French-held sector east of the Ypres-Yser canal from the Arras just before the Second Battle of Ypres started on 22nd April 1915. His date of death was confirmed as 21st May 1915.

Some of the British were buried in Cement House cemetery.  The Diggers and the burials were followed by the BBC for a documentary called “The Forgotten Battlefield”.  You can get more inforamtion on this if you use the link below.

At the time major construction work for new buildings in Ypres' northern industrial zone was also being carried out.

I can see why the Yorkshire Trench has been preserved the way it has been done, but it seems very santised to me, I do not know if this is because its slap bang in the middle of the Industrial Site, but it lacks that “Wow” factor of say Bayernwald or some on the St. Mihiel Salient, which seem more authentic.