The NMBS had already visited the Ardennes back in 2003, When Gerry, Steve and Lance had passed through it between Verdun and Waterloo. We had looked around Bastogne and St. Vith, but not really seen the huge Battlefield.

So after the 2007 trip to The Somme, The Ardennes was the chosen trip. Sadly Stuart could not make the trip, but for Kevin, it was his first trip to The Ardennes. Setting off at 4am in the morning down to Dover in the Van was the plan and once we got to Dover and on board the ferry, the holiday really started.

As soon as we hit Dunkirk, the weather changed and we were blessed with a week of wall to wall sunshine.  We hit Gouvy and the Ponderosa IV (we name all our gites Ponderosa, this was the 4th one we had stayed in) about tea time.

The Gite was rustic, yet spacious (although the upper rooms were not meant for anyone 6ft +, and banging your head on door frames as you went for a middle of the night wee was common place) Bonuses were a BBQ and to Steve's and Lance's delight a fireplace and being in the Middle of one of the biggest forests in Europe meant that we never went short of wood.

Gouvy is a nice little town and before we had booked the Gite we made sure it had bars. Previous years, bars had been a "Trek" away. The Morning after we had arrived, Steve and Gerry went out for a reccy and to get some milk and bread.

It was just the NMBS's luck to find that the bars were useless. One had closed for the Holidays (and would not open until the night we left) the other had closed down. 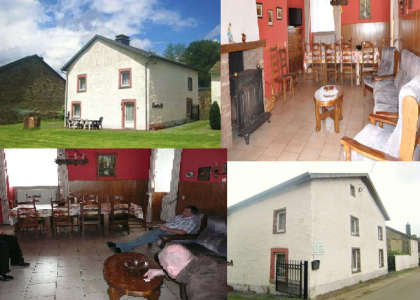 The Gite at Gouvy (Au Wago)

The Battle of the Bulge in the Ardennes was Hitler's last gamble in the West. It was a counter attack against the Allies, who since D-Day had made massive advances to the German Border on the Rhine.

The attack by the Nazi's had taken the Allies by surprise and 1000's of Americans were killed, captured or injured. The British who were more North, escaped with lighter losses, but the CWGC Cemetery at Hotton shows that the Bulge was not just an American battle as history tends to dictate, but this does not take away the heroics or valour of the Americans, who at times (like at Bastogne) faced great odds and a resilient foe.

Places that we visited and we will mention in more detail, like Bastogne, Malmedy, Foy and Noville have become infamous for the horrors of war.

The first main day we had in the Ardennes was nipped across the near-by border to Luxembourg.

The Border crossing has a mini shopping mall and a drive thru' off licence! This is because beer, spirits and Ciggies are dirt cheap with little VAT. Petrol and diesel is cheap too - and all petrol stations seemingly have to charge the same price, so stops undercutting and price fixing. So if you are in the area, stock up and fill up in Luxembourg.

When we visited The Ardennes in 2003, there were actually queues to the border from both Germany and Belgium to get cheaper stuff. On some roads you still can see the old Customs boxes and crossing points.  The first stop off was the beautiful, idyllic town of Clervaux.

Clervaux is a wonderful little town, with a large abbey overlooking the main town, which in itself has a large church and castle. The castle was our main port of call as it holds a "Battle of Bulge" Museum. Sadly (and strangely) the museum did not open until 1pm.  We as always make use of daylight and were at Clervaux at 10am.

Time did not permit us to stay 3 hours, although Clervaux has so many quaint and pretty cafe-bars we could have stayed, but unlike say, Ypres – The Ardennes covered a huge area and time for us is our enemy. 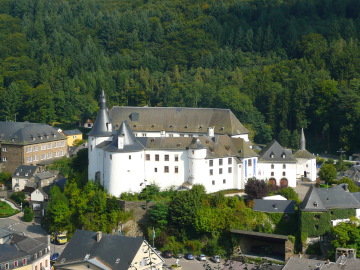 After fleeting through the town of Manach we headed towards Hosingen and a famous memorial for Ralph Wardle and John Kelly who were in the 702 Tank battaliion. During the battle of the bulge on the night of 27th January 1945, their tank skidded and slipped off an ice covered cliff top. Not a way you'd want to go.

Next stop was Diekirch - which has the National Museum of Military History. Again My view is too many manequins - but to be fair it does have a significant number of vehicles and military hardware. It does have few tanks that a Bulge Museum would suggest, but never the less it's a nice little museum and it does have this recommendation:

"The United States Permanent Congressional Delegation to the European Parliament is deeply moved by the reality and power of this museum as it depicts the heroism and horror of WW II . We are profoundly grateful to all our heroes for allowing us to live in a free society"

And who is the NMBS to argue with the United States Permanent Congressional Delegation to the European Parliament?

The Battle of the Bulge is famous for George Patton and the village of Ettelbruck is known as "Patton-town" - and Patton town would not be Patton town without a statue of Lance's least favourite general.

Although the picture below makes him look like some feature at the Chelsea Garden show. 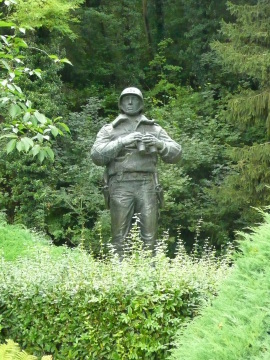 The NMBS then ventured to its first foreign Capital - Luxembourg City. The reason we aimed for the city was that we were curious to see what Luxembourg City was like. Paris is Paris, Berlin is Berlin, London, London - but what about Luxembourg City?

Luxembourg City according to Wikipedia is one of the richest cities in the world.It (and to be fair we wasn't there that long and we were on the Périphérique and missed a lot), but it did not seem glam or flash or as special as Paris or Vienna. Indeed you could not envisage a romantic weekend in Luxembourg City.

Oddly Luxembourg City has a twin town in England, Camden. Those who are from London will know Camden and wonder in amazement why a European Capital City. A city famed for Null-point in many Eurovision Song Contests decided to have The Electric Ballroom and London Zoo as its twin. But what the City may have lacked in Va-va-Vroom, the rest of this beautiful Country makes up for.

Maybe you were wondering why we were in Luxembourg City. Simple in the district of Hamm there are three main things. Two large military cemeteries and an Airport. The Luxembourg American Cemetery and Memorial is located.

The cemetery can be found 2.5 kilometres southwest of Findel Airport. It is administered by the American Battle Monuments Commission, Under a US-Luxembourg treaty signed in 1951 the US government was granted free use in perpetuity of the land covered by the cemetery, without taxation.

Most of the interred died during the Battle of the Bulge which was fought nearby in winter ’44 and spring ’45 and the 5,076 headstones are set in 9 plots of fine grass, lettered A to I.

Two flagpoles flying the stars and stripes overlook the graves area and situated between the two flagpoles lies the grave of General George S. Patton Jr.

Not far from the cemetery entrance stands the white stone chapel, set on a wide circular platform surrounded by woods. It is embellished with sculpture in bronze and stone, a stained-glass window with the insignia of the five major U.S. commands that operated in the region, and a mosaic ceiling.

German fallen from the same battle are buried in the Sandweiler German war cemetery, about 1.5 kilometres away. The designs of the tombstones are dark stone crosses compared to white tombstones of the American cemetery. 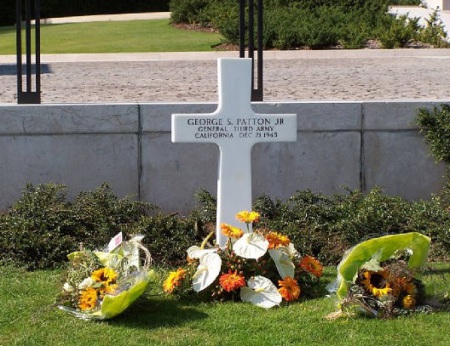