On the way back from The Ardennes seeing we were on a ferry docking at Dover we stopped off at a very important site at Capel-le-Ferne.  The Battle of Britain Memorial is situated between Dover and Folkstone.

The idea for a National Memorial to The Few came from one of their number. Wing Commander Geoffrey Page had been a 20-year-old Hurricane pilot with 56 Squadron in the Battle.

On 12 August 1940 Pilot Officer Page was shot down and baled out into the sea with terrible burns. He went on to become a founding member of the Guinea Pig Club for RAF personnel treated at the Queen Victoria Hospital by the team of plastic surgeons led by Archie McIndoe.

Determination and courage ensured that Geoffrey returned to operational flying, becoming a wing leader. He was awarded the DFC and bar and at the time he received the DSO in 1944 he was credited with having destroyed 15 enemy aircraft. A crash late in the war seriously injured him again and he returned to East Grinstead.

Years later, Geoffrey realised to his astonishment that there was no memorial to his comrades who had flown with him in Fighter Command in 1940.

His determination that The Few should be remembered found a focus at "Hellfire Corner", the area of Dover and Folkestone over which so much of the fighting had taken place in 1940. The Battle of Britain Memorial Trust was established and fund raising began.

On July 9 1993, Her Majesty Queen Elizabeth the Queen Mother opened the National Memorial at Capel-le-Ferne to see Geoffrey's dream realised. He died in August 2000, shortly after attending the Memorial Day marking the 60th anniversary of the Battle. 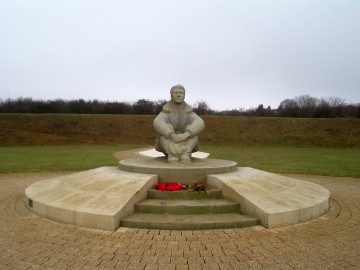 In 2013, during my visit to London, I took many pictures of the Battle of Britain Memorial on the Thames Embankment.

It was unveiled on 18 September 2005, the 65th anniversary of the Battle, by Prince Charles and Camilla, Duchess of Cornwall, in the presence of many of the surviving airmen known collectively as "The Few", following the Royal Air Force Service of Thanksgiving and Rededication on Battle of Britain Sunday.  This service is an annual event, the first of which took place in 1943 at St Paul's Cathedral and since has taken place in Westminster Abbey.

The monument was conceived by Bill Bond, founder of the Battle of Britain Historical Society, who was later awarded an MBE for his services to heritage. He was solely responsible for negotiating with the City of Westminster to secure the site of the monument, as well as appointing Donald Insall Associates as architects. He also formed the fundraising committee after raising over £250,000 through an appeal. The budget was £1.74 million which was funded in the main by private donations. Bill Bond appointed Lord Tebbit as chairman of the fundraising committee.

The monument utilises a panelled granite structure 25 metres long which was originally designed as a smoke outlet for underground trains when they were powered by steam engines. A walkway was cut obliquely through the middle of the structure, and is lined with panels of high relief sculpture in bronze depicting scenes from the Battle of Britain. The centrepiece is an approximately life sized sculpture of airmen scrambling for their aircraft during the battle. The outside of the monument is lined with bronze plaques listing 2,936 airmen and ground crew from 14 countries who took part in the battle on the Allied side.

The sculptor of the monument is Paul Day.

The statue was cast by Morris Singer, which is the oldest established fine art foundry in the world and has cast many prominent statues and sculptures in London and around the world, including the lions and fountains in Trafalar Square.