The wait was over and the next instalment of the NMBS trips hit Mons and Cambrai. Those of you who have been lucky enough to have read Kevin’s wonderful book, Four Journeys will know that even best laid plans and trips usually go wrong. Amazingly the Mons and Cambrai trip went relatively hassle free. Maybe a few cross words from older members in Wellington’s HQ, the lack of a DVD player in the Gite and Stuart’s face when he saw pig’s trotters in the Shopping trolley, but everything else seemed okay.

The Ardennes trip missed a vital factor and it was a bonus this year that we had it back, namely Stuart – who had missed the Ardennes, so it was a welcome back Stuart.

The trip down to Dover was easy peasy and the long muted and awaited go on the M6 (Toll) happened as there was tailbacks and closure further down the normal M6.

Stuart and Kevin had stayed at mine and once Gerry (with passport) and Lance had arrived the long wait was over and after hitting the M60 we headed to the M6 (and the aforementioned Toll) And were witness to some amazing sunrises in the mist. Finally we were leaving the dreaded M25 on the way to Dover in good time. Indeed looking at the possibility of an earlier Ferry.

This year we did the straight forward thing and went Dover to Calais and then straight to the Gite. For the first year we did not christen the Gite the Ponderosa for some reason. But for the next week it was home.

It was in a small village called Bruille lez Marchiennes, which was like most French villages apart from huge railway sidings nearby (And for any railway geek out there why do the French have "Purple" lights on their signals? They have the normal Red, Yellow Green, but also purple). Bruille lez Marchiennes was quite large, but surprisingly lacking pubs. 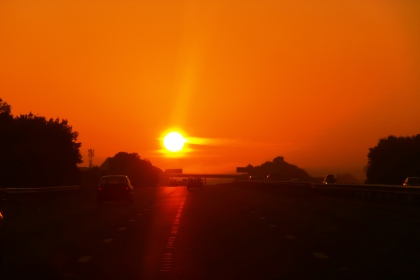 There was one there, but (no surprise here) it opened when the French owner had smoked enough Giantes and drank enough Ricard before he could be bothered. When we got to Bruille lez Marchiennes (will be called Bruille from this point on) most of us did the hard work. A certain member, who shall remain incognito ran to the best room, dropped his bags and went to the pub, whilst the other 4 non-Scottish members did the work of unpacking and preparing. The Gite was like the one in the Ardennes and the Somme, okay - but very dated.

Think a bit of BBC 2's 'Victorian Farm' and you will have an idea of the Gite - although the woman on Victorian Farm would have cleaned the cooking utensils better! There was a massive ramshackle of odds and sods to cook with and being Chef of the tour, I was less than happy and even Gerry the other chef who is less grumpy than me when confronted with a poor kitchen agreed. This was the first Gite where we had to buy some glasses to drink from.  The bedrooms were basic. No en-suite this time, although a small wash bowl.

Stuart became a smorgasbord for midges, fleas and bedbugs. He was unhappy with the French and their hygiene skills in the bed linen department, although no one else seemed to suffer; maybe French Bugs loves Scottish Blood!

Bruille was ideal being in the middle of the two places we were visiting, Mons – to the North East, in Belgium and south of us Cambrai, in France, so we were right on the border. The added bonus was that the city of Valeciennes was also near, The German army occupied the town in 1914, and it was only retaken after bitter fighting in 1918, by British and Canadian troops (one of whose soldiers, Sergeant Hugh Cairns was honoured in 1936 when the city named an avenue after him).

Doing both Mons and Cambrai tied up some loose ends for the NMBS and trips to the Western Front. Mons as it was the start and the end of the war, Cambrai as it linked up with the Somme and the Hindenburg Line.

Other small gripes about the Gite were that the owner had not given us enough Gas to cook with and water had to be turned on a few hours after we arrived.

Further mither ensued with the lack of DVD player. Kevin, who usually graciously brings his didn't as the blurb from the Gite website claimed it would have one. There we was, DVDs to play and no DVD.

So we had to buy a DVD player. Now because we bought it in a French Supermarket, it has a French plug, therefore it is now the Official DVD of the NMBS. Later in the week the DVD gave us chance to watch a quaint little WWI film that I had brought called "Joyeux Noel" and Frankie Boyle live DVD. 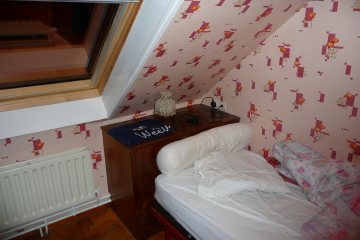 The Gite was nice but small

Mons will go down in WWI history for being the place where the first soldier was killed in WWI and the last.  Ironically both are buried a few yards from each other.  It was the first major action of the British Expeditionary Force (BEF) in the First World War. It was a subsidiary action of the Battle of the Frontiers, in which the Allies clashed with Germany on the French borders. At Mons, the British attempted to hold the line of the Mons–Condé Canal against the advancing German First Army. Although the British fought well and inflicted disproportionate casualties on the numerically superior Germans, they were eventually forced to retreat due both to the greater strength of the Germans and the sudden retreat of the French fifth Army, which exposed the British right flank. Though initially planned as a simple tactical withdrawal and executed in good order, the British retreat from Mons lasted for two weeks and took the BEF to the outskirts of Paris before it counter-attacked in concert with the French, at the Battle of the Marne.

About three miles to the north-east of Mons, on the main N6 road that leads to Soignes, are two memorials commemorating the first and last shots of the Great War. On the left hand side as you head away from Mons is the First Shot Memorial. This is a short blockwork obelisk which is now sadly in a poor state of repair, and is set back in the bushes by the side of this farily busy road. The text on the plaque, first in French then below in English states

"This tablet is rerected to commemorate the action of "C" Squadron 4th Royal Irish Dragoon Guards on 22nd August 1914, when Corporal E. Thomas fired the first shot for the British Expeditionary Force, and Captain C.B. Hornby led the first mounted attack against the Germans".

Between the 12th and 17th of August, the BEF had been crossing the channel to France. They then travelled to the area near Mons and were largely in position by the 20th. On the 22nd, 'C' Squadron sent out two patrols from Obourg in the direction of Soignes, and here they encountered a German piquet, on which they fired, forcing the Germans to retreat. Ironically, the memorial was unveiled in 1939, just before the start of the Second World War.

On the opposite side of the road is a plaque on the wall of a restaraunt (Le Medicis) commemorating the spot where the 110th Canadian Infantry Battalion stopped at the moment of the armistice on the 11th of November 1918. The plaque is on the right hand front of the building. 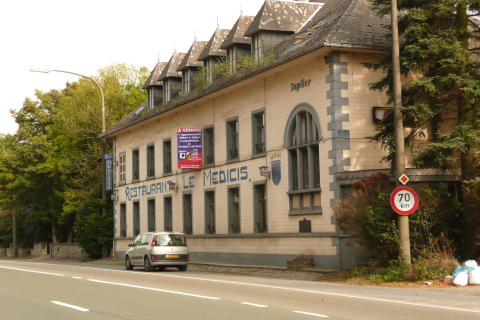 Where the 110th Canadian Infantry Battalion stopped at the moment of the armistice on the 11th of November 1918. 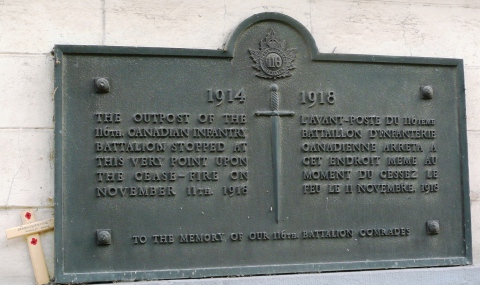