Trefriw War Memorial is located on the B5106 road to the north-west of Llanrwst, and about 4½ miles north of Betws-y-coed by road.  It is opposite the Trefriw Woollen Mills and next to the picturesque River (Afon)Crafnant.

The memorial has a Welsh inscription – which is in full below, together with a rough English translation (apologies for any shoddy translation) – any Welsh Speakers, please translate and let us know in Guestbook.

The memorial has the names of 19 from WWI and 3 from WWII - Thank you to Bryn Hafod for his help with the names. 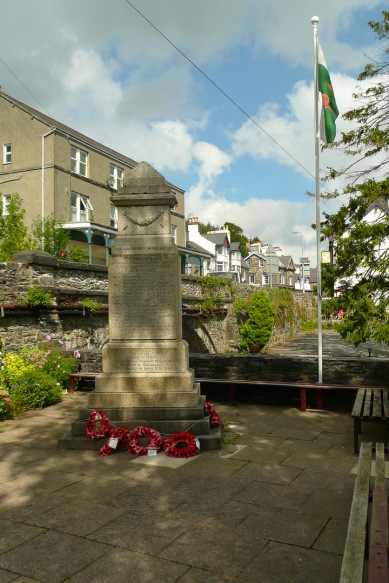 Colwyn Bay War Memorial commemorates those men and women of the area who died during World War I, World War II and the Korean War.

The memorial, in the form of a soldier standing on a stone plinth, was sculpted by John Cassidy. It was erected at the front of the original Colwyn Bay Town Hall and unveiled on Saturday November 11th 1922.

When the Town Hall was demolished in 1964, the Memorial was moved nearby to Rydal Gardens, which have now been renamed Queen's Gardens.

It has friezes depicting soldiers marching to war.  The deck of an armed merchant ship.  Returning soldiers & sailors, some wounded, and nurses. As you can see in the picture.

St. Asaph War Memorial commemorates those from the area who died in wartime.The small city of St. Asaph  (Llanelwy), with a population of 3400, is situated between the rivers Elwy and Clwyd at the northern end of the Vale of Clwyd.

To the glory of god this cross was erected in memory of the men of this city who fought and fell for king and country 1914-1919 and 1939-1945.  Bydd eu henwau byw byth (Their names will live for evermore).

It lists the names of 43 from WWI, 9 from WWII and a civilian death from WWII. 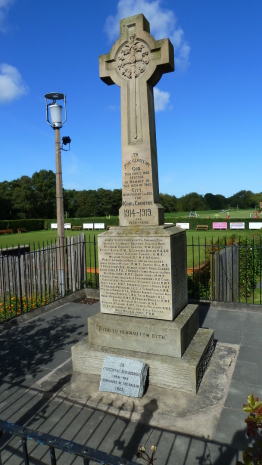 The Llangollen and Llantysilio War Memorial commemorates those from the area who died in wartime.  It is split into two, with a Celtic Cross for WWI (With 71 names) and a tablet for WWII (29 names)

The Memorial stands in Castle Street, at its junction with Bridge Street, in the centre of the town, next to Barclays Bank. 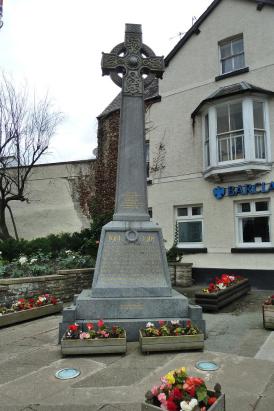 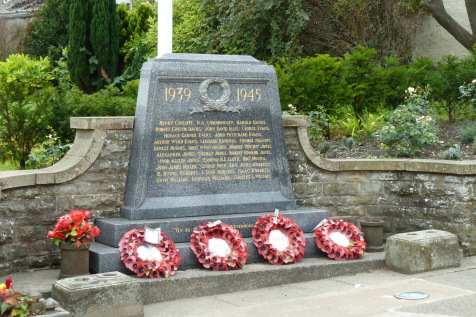 The Llandudno War Memorial commemorates those men of the area who died in two world wars and takes the form of a high obelisk surmounted by an urn. It stands on the promenade in Prince Edward Square at the top of Gloddaeth Street. 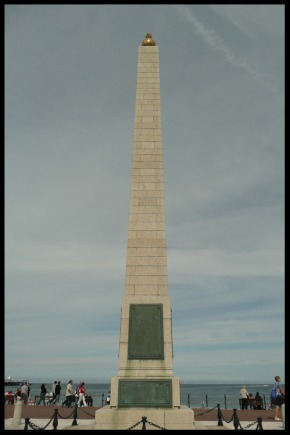 Dolwyddelan War Memorial is close to the Bridge over the River Lledr.  It is also close to where I had some School Holidays.

It is in its own Gardens and have a look at the Church opposite. 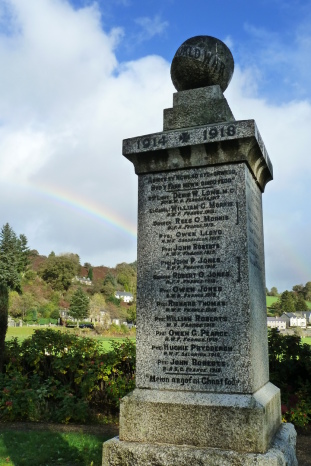 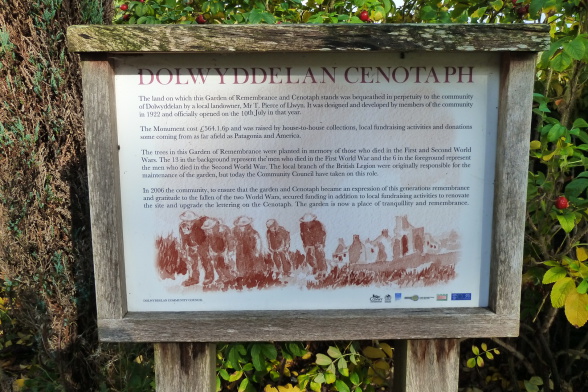 The Capel Garmon War Memorial commemorates those men of the area who died during World War I and World War II. The memorial takes the form of a standing, stone Celtic Cross, sited in the corner of the churchyard of St. Garmon's Parish Church at Maes Llydan. 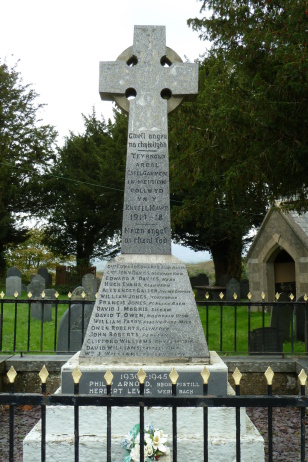 Of the 24 names listed, 3 of them named Jones were brothers from Penygroes 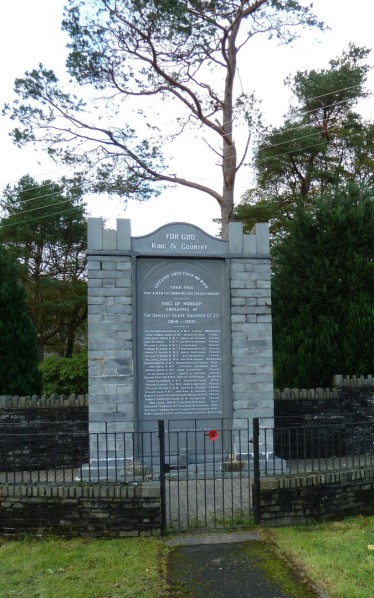 The Llanddulas War Memorial commemorates those men of the area who died in two world wars and takes the form of a stone, standing Celtic Cross.

Banks enlisted in the Royal Air Force Volunteer Reserve in 1942 and become a member of 112 Squadron, Desert Air Force. On 29 August 1944, three weeks into his active service with 112 Squadron, he was shot down over Northern Italy whilst undertaking an armed reconnaissance operation in a Mustang.

He tried to reach the Allied lines and made contact with a partisans group (the Boccato group). During the following months he "became an outstanding figure, advising and encouraging them in action against the enemy".

In December 1944, an attempt to cross to Allied territory was planned to enable resupplying of the partisans to take place, but the group Banks was with was betrayed and captured by German forces.

He was tortured by German authorities and then by the Italian Militia over a period of several days, but Banks remained silent.

He was then stripped, doused in petrol and set alight before being thrown, weighted down, into the River Po. He managed to survive this and swam to the river bank, where he was recaptured by the Brigate Nere (Italian Fascists) and shot in the head.

Initially buried in a communal dung-heap by his captors, Banks is now buried at the Argenta Gap War Cemetery.

He was awarded the George Cross posthumously for his "courage and endurance", with his conduct being described as "at all times, in keeping with the highest traditions of the Service, even in the face of most brutal and inhuman treatment.". Notice of the award was published in the London Gazette on 5 November 1946. The Cross was presented to his father by King George VI.

His captors were tried by a War Crimes Tribunal and were imprisoned for between 4.5 and 20 years; the one who directed his torture was shot after being captured by Italians.

The man who murdered Arthur Banks was Lieutenant Turati. Turati had been a member of the infamous Brigate Nere. Postwar, Ian Bell, Nazi hunter, captured Turati at his home in Italy. 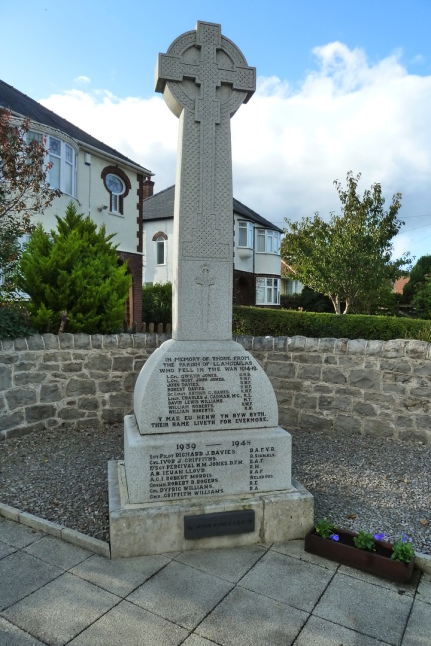 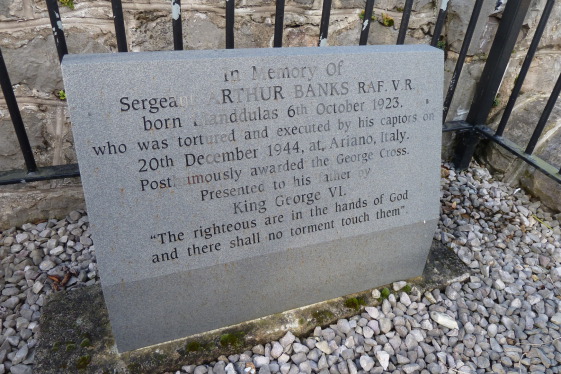 The Betws yn Rhos War Memorial commemorates those men of the area who died during World War I.

The memorial, in the form of a stone, standing Celtic Cross, featuring Celtic knotwork, stands in the grounds of St. Michael's Parish Church. It was unveiled in 1920.

The Rhyl War Memorial commemorates those local people who died in conflicts throughout the world. The memorial is sited on the seafront in the centre of the town and takes the form of three pillars, the central one featuring a soldier of the Boar Wars. 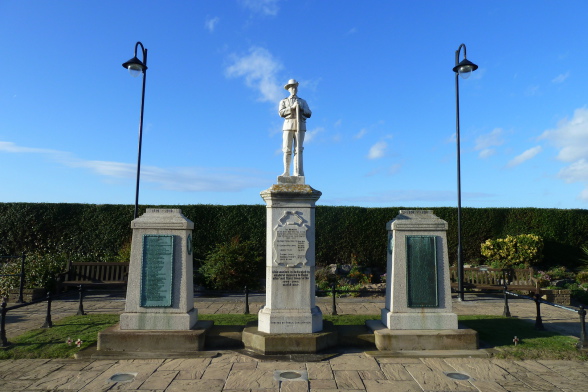 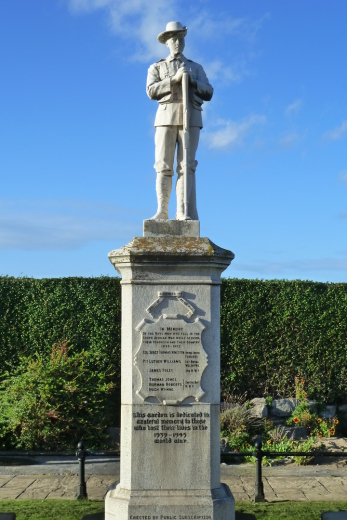 Gwespyr War Memorial sits in a small memorial garden near the top of Gwespyr Hill and was designed by R.Bruce Esq of Talacre. It commemorates all of those men who fought in World War I, together with the one soldier who died in action. 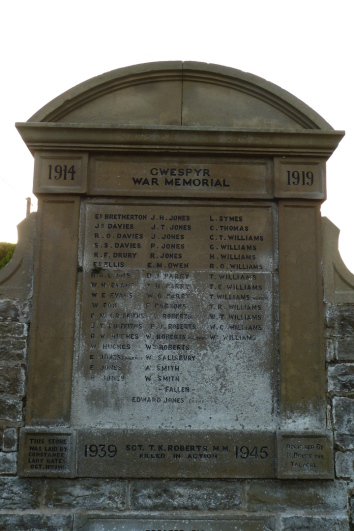 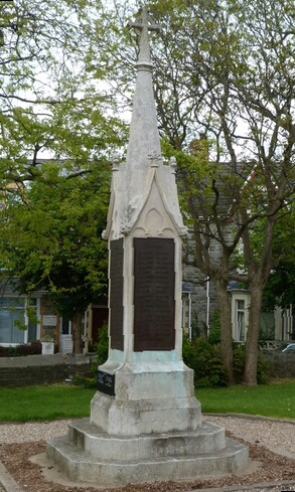