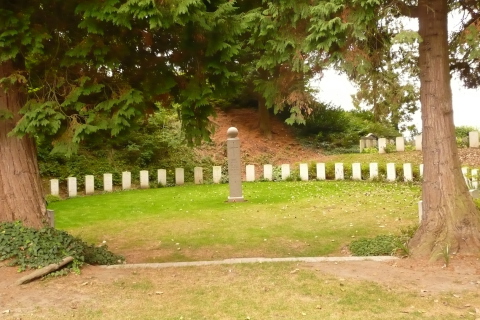 The St Symphorien military cemetery is a First World War burial ground 2 kilometres east of Mons in the Belgium.  It was created and maintained by the German Army, and it contains the graves of 229 Commonwealth servicemen and 284 German soldiers. The cemetery is overlooked by a "granite obelisk some seven metres high", commemorating the dead from both sides in the Battle of Mons (August 1914) as well as a Commonwealth Cross of Sacrifice.

There is an additional German monument to the dead of the 4th Battalion, Middlesex Regiment from the same battle. John Parr and George Lawrence Price are buried here, traditionally believed to be the first and last Commonwealth soldiers killed in action during the First World War.

St Symphorien also contains the grave of the first Iron Cross recipient of World War and of Maurice Dease VC, the first posthumous recipient of the Victoria Cross in the war.

The character of the cemetery differs from the "standard" British and German formats as it is more landscaped with different levels. 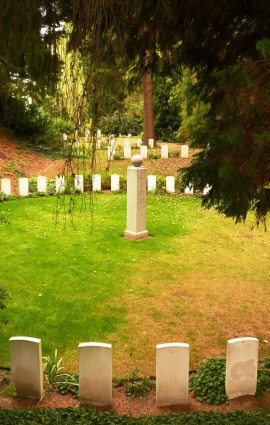 St Symphorien Military Cemetery was made by the Germans in August 1914, after the Battle of Mons. It remained in their hands until November 1918, and has the distinction of containing the graves of some of the first and last casualties of the First World War.

The site for the cemetery, an existing but artificial mound, was the gift of local resident Jean Houzeau de Lehaie, and was laid out with great care to create the effect of a wooded garden or park.

At the highest point, there is a granite obelisk some seven metres high, erected by the Germans in memory of both German and British servicemen killed in the actions near Mons in August 1914.

Elsewhere in the cemetery there are further German memorials to officers and men of the Middlesex Regiment (Plot III), Royal Fusiliers and Royal Irish Regiment (Plot VI).

At the Armistice, the cemetery contained the graves of 245 German and 188 Commonwealth servicemen, but further graves were brought in later from the following burial grounds:

There are now 229 Commonwealth servicemen of the First World War buried or commemorated in St. Symphorien Military Cemetery. 65 of the burials are unidentified but special memorials commemorate five casualties believed to be buried among them, and four casualties buried in Obourg Churchyard whose graves could not be found.

The cemetery also contains 284 German war graves, marked by headstones in a variety of different styles. 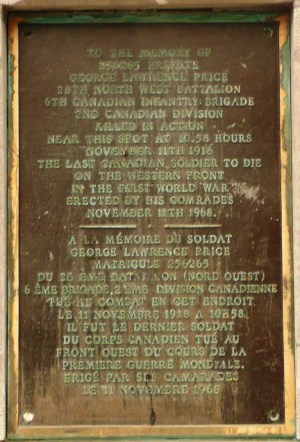 The official records state that Price was shot by an enemy sniper near the canal at 1057 hours. He was hit in the right breast and died shortly afterwards despite the attention paid to him by soldiers and civilians alike.

A native of Port Williams in Nova Scotia, Price was born on the 15th December 1892 had been working as a farm labourer in the town of Moose Jaw, Saskatchewan when he was conscripted on the 15th October 1917.

George Price is considered to have been the last Commonwealth soldier killed in the great war.

Originally he was buried in the communal cemetery at Havre, however he now rests in the Military Cemetery at St Symphorien (Grave V C 4) a few kilometres to the south. By chance he is surrounded by the first and last British soldiers killed in action as well as the first Victoria Cross recipient killed in action.

On the 50th Anniversary of his death veterans from the 28th Battalion gathered at the canal side to unveil a plaque to George Price which was placed on the wall of M Stievenart's home - the first house that they had entered.

Time has passed on and the canal has been widened and the old road bridge replaced. The Stievenart's house was demolished and for a while the plaque was displayed on the Hôtel de Ville. It has since been returned to its original position attached to a small brick monument

The inscription in both French and English reads:

To the memory of Private George Lawrence Price 256265 of the 28th North West Battalion, 6th Canadian Infantry Brigade, 2nd Canadian Division, killed in action near this spot at 10.58 hours, November 11th, 1918, the last Canadian soldier to die on the Western Front in the First World War. Erected by his comrades, November 11th, 1968.

Just behind it a pedestrian bridge has replaced the previous road bridge but it is still possible to walk across and have a rough idea from looking back as to what Price and his comrades saw.