The next day I awoke trying not to wake the others up so I could sort breakfast whilst the others had a bit of a lie in. But sods law in tip-toe mode I slipped on the metal spiral stairs and went flying.

After Breakfast, I poured a home made soup into a huge flask whilst Kevin was making tuna mayo butties as we were going to be away from places to eat as it was Band of Brothers day.

Today we were touring places that the 101st Airborne Division and the TV series "Band of Brothers" made famous.Basically the towns and villages of Mardasson, Bastogne, Foy, Noville, Rachamps and Houffalize. At Mardasson is the large American memorial.

The Mardasson Memorial is a tribute from the Belgian population as a whole to the American nation. Its construction came about thanks to an initiative of the Belgian American Association set up in 1945 and consisting of various Belgian dignitaries who wished to perpetuate the memory of those brave Americans who fell on our soil. Given that the American effort was so decisive here, Bastogne was chosen as the site for the memorial’s construction. For the Americans, Bastogne is the symbol of their legendary spirit of resistance, but also of their sense of judgement in their victorious counter offensive.

On the 4th July 1946, in what was to become the Memorial’s central point, some earth was removed and placed in a casket, which was then sealed in the United States Ambassador’s presence and sent by special plane to Washington. A Belgian delegation, led by the Minister of Defence, handed over the sacred casket to the then president of the United States, Harry Truman. It was above this central point that the stone bearing the following inscription would later be placed.

The names of the 48 states which then made up the United States are engraved on the crown. Around the outside, badges from the main battalions to have participated in the Battle of the Bulge, can be found. On the inner wall the battle’s progression is explained in English and in ten paintings. 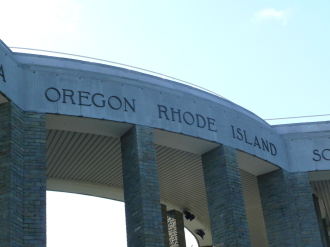 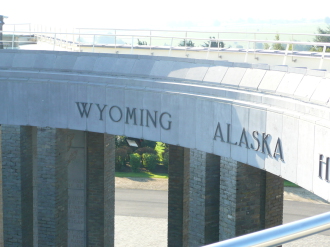 Bastogne town is a delightful town - typical of the Ardennes. It seems "Ye Olde" which is a surprise seeing it was heavily bombed in WWII.

Again the curse of the Tourist Information Centre was here. Why is it when we go places and we need information - or more importantly Gerry needs concertina postcards are the shut? Gouvy T.I.C never seemed to be opened and Bastognes opened an hour after we got there, so we had to wait - at least it gave us chance to see the town and have a coffee.

The whole of the Ardennes trip kind of ran side by side with the Band of Brothers TV series and we followed some of the major points of the series. We tried in vain to find the site of the memorial to Renee LeMaire - who was in the series and was shown to be killed at Bastogne and form a friendship with Eugene Roe.
In the series she was killed in Bastogne Church when it was bombed. Renee LeMaire and the Congolese nurse, both were based on real characters. According to Belgian history buff Roger Marquet, nurse Lemaire worked in the 10th Armoured Division aid station, which was situated on the Neufchateau road, some distance from the seminary where Renee was depicted as being killed.

The Congolese nurse, named Augusta Chiwi, also worked in an aid station several blocks away from the seminary, and she survived the bombings. Nurse Chiwi was seen as recently as 1999, a cheerful woman in her 70's, living in Brussels.

The Seminary is at the east end of the main drag, across from the church. So, it's doubtful that Eugene Roe would even have met those nurses. The seminary began as the 501 regimental C.P. and aid station, although casualties from other units were also treated there.

We tried to find her memorial and had no luck. Only now do we know where it is - on the side of a shop selling Baby equipment, called baby city. This shop is near Bastogne town centre - but according to the Tourist Information Trail the memorial is quite a bit out of the town centre. We actually must have walked past it! Grrrr! 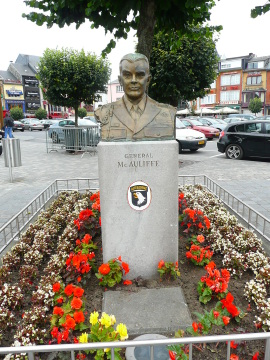 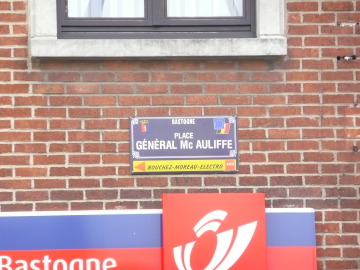 At least in Bastogne we did get to see some sights like the Tank in McAuliffe square, his statue and the road sign named after him. We also found a nice little roadside café which sold kebabs or "Kebaps" which was nicely washed down with a Ice Cold Coke.

Then we moved up the road to Foy and Noville. Foy was in the Band of Brothers as a main battle for the 101st - but it seems that Spiers and co in the TV series were fighting in the wrong village. The next Village of Noville seems to be the where they actually were.

This is just another example of slighting any and all other units of the 101st besides Easy Company 506th in the series. A few minutes later, in dialogue from Eugene Roe, he also remarks about first battalion pulling out of Foy.

Foy was not nearly as far into enemy territory as Noville, and in fact was merely the last stop for 1st Battalion on their way back to relative safety south of the Foy-Bizory Road.The series also made it look like Foy was attacked and taken only once during December to January battles north of Bastogne. In fact, D, G, and H companies had taken and retaken Foy a half dozen times during those weeks, and Easy Co didn't go in until 13 January, which was the LAST time the village was taken.

The previous spoiling attacks were launched by the 506th to prevent the Germans from staging powerful forces there. The town was always vacated soon after these attacks, because Foy was surrounded by high ground on 3 sides and the Germans held the high ground until mid January, 1945.

The position was not tenable for defence. We Visited the foxholes around the area at the Bois Jacques and were amazed that they were still intact. Although you know that some artistic licence had been shown in Band of Brothers you could not get away from the fact that men of the 101st were sleeping in these relatively small holes in the freezing winter of 1944/5.

We visited Rachamps where in the TV series Easy Company rested and the choir sang to them. This actually happened. It is also the place where Earl Hale was slashed in the throat by the German officer who had a knife hidden in his boot.

Joe Liebgott and his machine gun made sure that the roomful of German officers never made it out alive - later Hale, who survived the slashing ran into Patton and Patton had a go at him because he wasn't wearing a neck tie!!! At least Earl had a valid excuse! 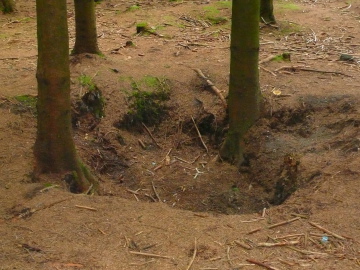 After we left Rachamps it was time to head back to the Gite, not before hitting Houffalize. Nestling in the narrow valley of the River Ourthe.

Houffalize is a strategic stopping-point on the major highway from Bastogne to Liège. In May '40, before withdrawing, the Belgian "Chasseurs Ardennais" had blown-up the town bridge in the face of advancing German troops.

On the night of 19 December '44, the bridge, rebuilt in the meantime, enabled American paratroopers of the 82nd US Airborne Division, coming from Reims, to reach their assembly zone in Werbomont, followed, several hours later, by the vanguard of the 116th Panzer, on its way towards the bridges over the River Meuse.

Believing the sector to be strongly defended, the German commander decided to change his itinerary and to head towards La Roche. Several days later, in order to destroy the strategic crossroads that Houffalize represented, the American commander had the town bombed several times.

Later the bodies of 189 civilian victims were pulled from the ruins of Houffalize.

We returned to the Gite to enjoy Lance's Ginger with Ginger flavoured Chicken and a soupcon of Ginger With a Ginger coulis and Ginger mash in a Ginger curry (he over did the Ginger).

Although the Battle of the Bulge is seen as an American Battle - The British did fight and die in this battle too. The next day we were all set to explore the British sector in the Ardennes.