After leaving the Somme and travelling 150 miles or so west we finally reached our Formule 1 hotel on the outskirts of the Périphérique in Caen. This was going to be our base as we explored and visited the Normandy beaches that became famous under the names of "Utah" "Omaha" "Gold" "Sword" and "Juno", better known as The D-Day (Operation Overlord) beaches.

I had previously visited the beaches aged about 12, but the awe and sight of these beaches still amazed me a quarter of a century later. These were the beaches that finally marked the beginning of the end for Nazi Germany (combined with the Soviet attack in the East). 70 years later it is still not lost the importance of these landings.  Still to this day it is the biggest naval armada with 5,000 ships and landing craft. The consequence of the landings were summed up by Eisenhower on the eve of D-Day Allies by saying:

"You are about to embark upon the great crusade toward which we have striven these many months. The eyes of the world are upon you...I have full confidence in your courage, devotion to duty and skill in battle."

The D in D-Day stands for Day (the French call it Jour J) The earliest use of these terms is by the U.S. Army that the United States Army Centre of Military History has been able to find was during World War I In Field Order Number 9, First Army, American Expeditionary Forces, dated 7 September 1918: "The First Army will attack at H hour on D day with the object of forcing the evacuation of the St. Mihiel Salient" – We visited St. Mihiel in 2010. 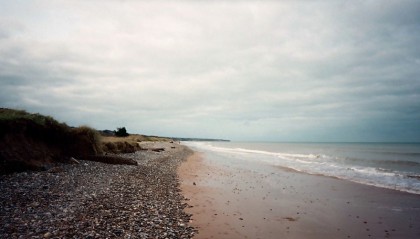 It is hard to visit the D-Day beaches and not visit the American Cemetery at Colleville.

Seeing the Colleville-sur-mer American Cemetery for the first time is jaw-dropping, it fittingly, it overlooks Omaha Beach.

The Spielberg film "Saving Private Ryan" uses the Cemetery to great effect in the opening and closing credits of the film in the segments when "Ryan" visits the grave of Captain John Miller (Tom Hanks). The film is based in parts of the Niland Brothers, although Hollywood being Hollywood changed the Niland story to suit.

The Opening 25 minutes or so of Saving Private Ryan are amazing and possibly does come close to the hell and carnage on "Bloody Omaha" that day in June 1944.

A more bizarre Hollywood nod to the Cemetery is the film "The Omen". The promotional poster of the Anti-Christ "Damien" in a cemetery surrounded by crosses is (rumoured) to be Colleville.

The Cemetery is huge and covers 172 acres and 9387 Americans are buried there. 307 of them are unknown. As NMBS trips have spread all over Europe we realised that this size is of the norm for American Cemeteries. Perhaps the sheer magnitude of the American Cemetery makes you forget that it was not just an American battle. The scale of slaughter at Omaha is hard to ignore, but brave deeds on the night of 5th and Early 6th June by the British and Canadians should not be forgotten. 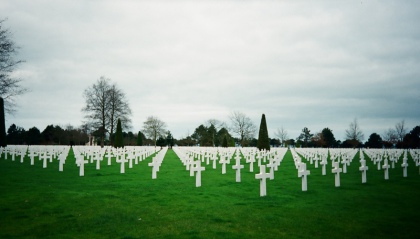 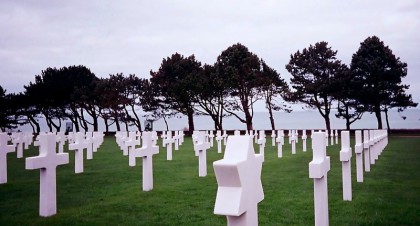 Graves (including a Jewish Grave) at Colleville

A real treat was the Pegasus Bridge museum. Pegasus Bridge is a bascule bridge (a type of movable bridge) over the Caen Canal, near Ouistreham. The bridge, also known as the Bénouville Bridge after the neighbouring village, was a major objective of Operation Tonga.

On the night of 5 June 1944, a force of 181 men, led by Major John Howard took off from RAF Tarrant Rushton in Dorset, southern England in six Horsa gliders to capture Pegasus Bridge, and also "Horsa Bridge", a few hundred yards to the east, over the Orne River. The force was composed of D Company (reinforced with two platoons of B Company), 2nd Battalion, Oxfordshire and Buckinghamshire Light Infantry; 20 sappers, 249 Fd Co. (Airborne); and men of the Glider Pilot Regiment. The object of this action was to prevent German armour from crossing the bridges and attacking the eastern flank of the landings at Sword Beach.

Five of the Ox and Bucks's gliders landed as close as 47 yards from their objectives from 16 minutes past midnight. The attackers poured out of their battered gliders, completely surprising the German defenders, and took the bridges within 10 minutes. They lost two men in the process, Lieutenant Den Brotheridge and Lance-Corporal Fred Greenhalgh.

Greenhalgh drowned in a nearby pond when his glider landed. Lieutenant Brotheridge was killed crossing the bridge in the first minutes of the assault and thus became the first member of the invading Allied armies to die as a result of enemy fire on D-Day.One glider, assigned to the capture of the river bridge, landed at the bridge over the River Dives, some 7 miles off.

Most of the soldiers in this glider moved through German lines towards the village of Ranville where they eventually re-joined the British forces. The Ox & Bucks were reinforced half-an-hour after the landings by Major Pine-Coffin's (yes! That was his name) 7th Parachute Battalion, and linked up with the beach landing forces with the arrival of Lord Lovat's Commandos

Units landed by glider near it during the Normandy Invasion on 5–6 June 1944. It was given the permanent name of Pegasus Bridge in honour of the operation. This name derives from the shoulder emblem worn by the attacking British, which is the flying horse Pegasus.

But being Early February, the Curator of the museum, Mark Worthington was bored rigid on his own, no-one there and we turned up. So he was delighted and to our delight he gave us a unique guided tour.

Mark was still there in when we visited on the 6th June 2004, but being the 60th Anniversary of D-Day, he was a lot busier after a wonderful tour, we shook his hand and thanked him a million times, and we would like to thank him again. 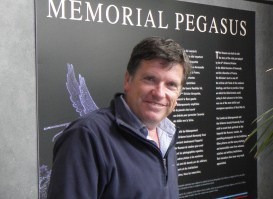 The Curator of the museum, Mark Worthington 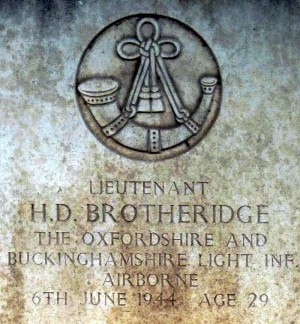 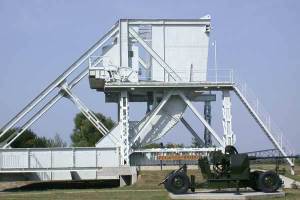 We then went to the British beaches of Gold and Sword.  Andrew McVeety’s Grandfather came ashore here during D-Day. I am sure it was a poignant moment for him. On a bitterly cold, drizzly and windy day, without a soul on the beaches apart from a man throwing a stick for a dog, it was hard to imagine the bravery of the men who waded ashore that day in June 1944.

We went inland to visit the large Canadian Cemetery of Bény-sur-Mer.  The Canadian soldiers in this cemetery were mainly killed during the early stages of the Battle of Normandy in the Second World War.

The Cemetery is located in and named after Bény-sur-Mer in the Calvados department, near Caen in lower Normandy. As is typical of war cemeteries in France, the grounds are beautifully landscaped and immaculately kept. Contained within the cemetery is a Cross of Sacrifice, a piece of architecture typical of memorials designed by the Commonwealth War Graves Commission.

Canadian soldiers killed later in the Battle of Normandy are buried south of Caen in the Bretteville-sur-Laize Canadian War Cemetery located in Cintheaux.

With the 2001 trip split between The Somme and Normandy, the first NMBS tour was coming to an end.

Little did we know that we would have some much fun, enjoyment, wonderment and friendship on what seemed to be a one off trip? But the following pages show that out of small acorns the NMBS grew.