Another full day ahead for us, but ever the chef I made a full English.  Not to the size or scale of Stuart’s legendary and fantastic full English, but it set us up for a full day.

Toc H (Talbot House in Poperinge) is a historical site and unknown to many battlefield tourists who pass Toc H, the L'esperance pub close by is historical as it is where Kevin had first Croque Monsieur. Toc H was the idea of Philip ‘Tubby Clayton’ who wanted to create a place where soldiers on the Western Front could find some peace and quiet when they were away from the trenches.

The house was named after Lieutenant Gilbert Talbot who was killed at Ypres in July 1915. His brother, Neville, was a senior Church of England chaplain who had been tasked with finding chaplains to join battalions at the front line. It was while carrying out this task that he came across ‘Tubby’ Clayton who became attached to the East Kent and Bedfordshire regiments. Clayton arrived in Poperinge in late 1915. After Poperinge we headed back to Ypres itself.

Unlike the Hill 62 museum, The “In Flanders Field Museum” is a joy to behold and when we went in November 2006 it was being done up, so looking at the blurb and the remarks on Tripadvisor, it is fantastic now.  The In Flanders' Fields Museum is devoted to the study of WWI and occupies the second floor of the Cloth Hall. The building was virtually destroyed by artillery fire during the Battles of Ypres and has been reconstructed. The curator, Piet Chielens, is a World War I historian. The museum is named for the poem by Canadian John McCrae.

I am quite speedy in museums; I do go around them at a pace.  What I liked about this one was the interactive side.  When you went in (in 2006, maybe not now) you get a ticket and on the ticket is the name of a soldier, could be French, German or British – he just fought in Flanders.  As you go around you get to find out what happened to him and at the end you find out did he survive the war or not.  The gift shop is a Mecca for battlefield geeks, I bought myself an “In Flanders Field Museum” Mug and I still have a brew out of it today.  That or the Salford pals mug Kevin kindly bought me.

Kevin and I was quick out the museum and we had to time to sample a sweet cheese based tart cheesecake and a good coffee in one of the many Patisserie Cafés in Ypres Town square.

Some of my Ticket stubs including In Flanders Field Museum

The centre of Ypres is a beautiful town; The Cloth hall is stunning and has been fully restored.  It is full of little shops, cafes and pubs and you can spend a full day just pottering around the town. Ypres had long been fortified to keep out invaders. Parts of the early ramparts, dating from 1385, still survive near the Rijselpoort (Lille Gate). Over time, the earthworks were replaced by sturdier masonry and earth structures and a partial moat.

This moat is predominantly on the south of the town, but runs north to the Menin Gate. Close to the moat, which helps set the beautiful setting is Ramparts Cemetery (Lille Gate) CWGC. The cemetery grounds were assigned to the United Kingdom in perpetuity by King Albert I of Belgium in recognition of the sacrifices made by the British Empire in the defence and liberation of Belgium during the war.

This small cemetery is the only CWGC burial ground within the ancient walls of Ypres. The cemetery was begun in November 1914 by French troops defending the city and was used by Commonwealth troops from February 1915 until April 1918, by which time the Western Front had moved away from Ypres. At the end of the war, the French graves were removed and concentrated in the nearby Ypres Necropole National French cemetery. Of the British and Commonwealth troops buried here, all but ten are named; in the case of five of the unidentified, the nationality could not be ascertained.

Rose Coombs, who did much to popularise WWI battlefields for tourists with her book "Before Endeavours Fade" had her ashes scattered in this cemetery in 1991. 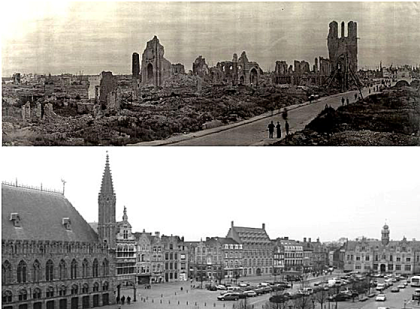 We rested our weary feet at a little, and I mean little museum, it’s like a corridor. The Ramparts museum and Café – (‘T Klein Rijsel) is close to the ramparts (as the name suggests) and  as you can see from my ticket stub above it is not too expensive and to be fair has a nice little feel to it.  It does have some good artefacts and is part of a pub, where you can drink some Ypres ale.  I didn’t actually try some of the ale, but I am told by my NMBS chums who, I respect for knowing what a good pint of real ale is, that is tasted of wet dog with soupcon damp wet Hessian sackcloth, now to be fair every pub can have a bad pint so, if you NMBS site readers have had a good pint, we would be happy to know.  Just tell us on our Guestbook.

Outside on the wall opposite are some CWGC signs that are original Imperial War Graves Commission signs. The IWGC amended its name to its present name of the CWGC in 1960. 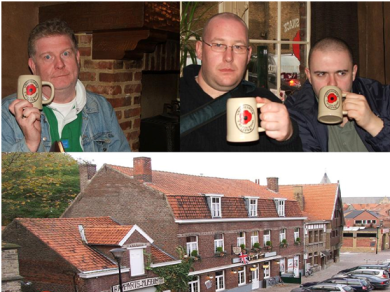 The NMBS look not too impressed, museum is the small annexe at the side, pub the larger building 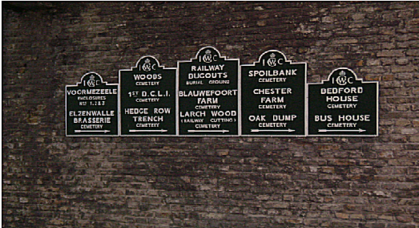 St. George's Church was built as a memorial to British and Commonwealth soldiers who lost their lives during WWI. It is a church that is ‘working’ and ‘practicing’, for the local people of Ypres and those who have been visiting Ypres since war ended in 1918 After WWI there was discussion about the idea of having an Anglican church in Ypres. The intention was to build it not only as a memorial but also as somewhere for the relatives of the fallen to visit and find a sanctum for peaceful reflection. However, there were opposing views to having a church of one particular faith, which I find ironic after most wars are caused my religion or politics.

In 1924 Field Marshal Sir John French, President of the Ypres League, made a request for donations to be put towards the construction of a church. The Ypres League was a British WWI veterans and remembrance society. It was founded on 28 September 1920 to act as a brotherhood for veterans of the battles of the Ypres Salient to remember those who died there, and to aid pilgrims travelling to the battlefields. It later became an incorporated society, based in London.

It produced a quarterly newsletter and a guide book to Ypres, and provided a variety of services to its members, including specially designed membership certificates. It also worked to successfully erect a memorial church at Ypres. International branches were established, and the League celebrated its tenth anniversary in 1930. Publication of its newsletter continued well into the 1930s, and branches were still active in the 1940s.

The founder of the League was a Canadian Ypres veteran, Colonel Beckles Wilson.  By December 1920, King George V had agreed to become the League's patron.  By 1925, there were three patrons: the King, Edward, Prince of Wales and Princess Beatrice.

Beatrice, the youngest daughter of Queen Victoria, was herself a mother bereaved by the fighting at Ypres, as her son, Prince Maurice of Battenberg had been killed in action in 1914 during the First Battle of Ypres and is buried in Ypres Town Cemetery and Extension.

There were various suggestions for the location of a church or chapel, including near to the old Menin Gate at the eastern exit of the town, near to the Lille Gate (Rijselpoort) at the southern exit of the town or on the ramparts. None of these were considered suitable for various reasons at the time. Eventually there was agreement that a piece of land on the north-western corner of the Vandenpeerboomplein, not far from St. Martin's cathedral, could be purchased.

The architect Sir Reginald Blomfield was given the task of designing the church. He was already involved with the architectural design of a number of the British and Commonwealth military cemeteries in the Ypres Salient.

One of the special annual services is the morning service on 11th November to commemorate Armistice Day. In recent years the number of visitors to Ieper for the Armistice commemorations has grown in size dramatically. Places at the St. George's 11th November morning service are allocated by ticket, which can be applied for in advance from the Secretary of St. George's Church.

St. George's website is excellent and wonderful and you can see it by using the link – here. 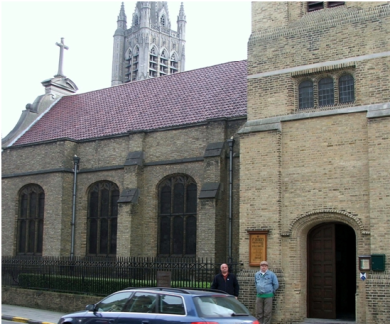