The Battle of Saint-Mihiel was fought between September 12–15, 1918, involving the American Expeditionary Force and 48,000 French troops under the command of U.S. general John J. Pershing against German positions. The United States Army Air Service (which later became the United States Air Force) played a significant role in this action This battle marked the first use of the terms 'D-Day’ (ironic for the 2011 NMBS trip) and 'H-Hour' by the Americans.

The attack at the St. Mihiel Salient was part of a plan by Pershing in which he hoped that the United States would break through the German lines and capture the fortified city of Metz. It was one of the first U.S. solo offensives in World War I and the attack caught the Germans in the process of retreating. This meant that their artillery were out of place and the American attack proved more successful than expected. Their strong blow increased their stature in the eyes of the French and British forces, but again demonstrated the critical role of artillery during World War I and the difficulty of supplying the massive World War I armies while they were on the move. The U.S. attack faltered as artillery and food supplies were left behind on the muddy roads.  The attack on Metz was not realized, as the Germans refortified their positions and the Americans then turned their efforts to the Meuse-Argonne offensive.

The whole around St. Mihiel was full of WWI stuff, there were miles of very well preserved trenches in the Apremont forest and  Bois Brulée areas – Although for most of the war, this area was the centred around the battles between the Germans and French, toward the end of the war some of the most bloodiest fighting involved the American “Doughboys”

The German retreat began on 11 September. The next morning the Americans attacked. Pershing committed two corps (I and IV) to the attack. The attack was backed up by an artillery barrage from 2,900 guns (many French) as well as a force of French tanks and a French Colonial division.

The Germans were caught by surprise. Outnumbered and slightly out of position, the German position collapsed. In 36 hours the Americans took over 13,000 prisoners and captured 466 guns. The Germans lost 5,000 killed and wounded, while the Americans suffered 7,000 casualties.

What the American troops lacked in experience of the Western Front they made up for in enthusiasm and morale. The first American troops had arrived in France in the summer of 1917 and had been waiting to enter the fray ever since. In contrast the arrival of increasingly large numbers of American soldiers on the front line had a very damaging impact on German morale.

With the salient eliminated, Marshal Foch ended the American offensive. The Americans were moved to the Argonne Forest where they would make their main contribution to the vital fighting on the Western Front. 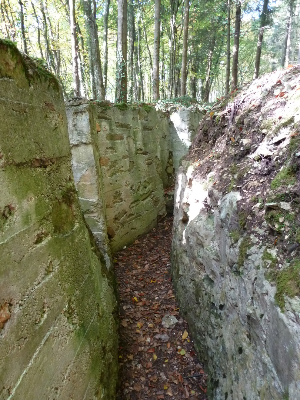 Meuse-Argonne offensive, 26 September-11 November 1918, was the southern part of the great triple offensive that broke the German lines on the Western Front. It was also the biggest battle fought by the American Expeditionary Force during the war.

Ferdinand Foch’s plan called for three offensives aimed at forcing the Germans out of France and Belgium. In the north the Belgians, British and French would attack through Flanders. In the centre the British and Empire forces attacked the Hindenburg Line between Cambrai and St. Quentin. Finally to the south the French and Americans would attack between Reims and Verdun, along the Meuse and through the Argonne Forest.

The Meuse-Argonne offensive would be launched by the American First Army, under General John Pershing, and the French Fourth Army under General Henri Gourand. The Americans held the eastern part of the line, from Forges on the Meuse, north west of Verdun, to the centre of the Argonne Forest. The French Fourth Army then took over to Auberive to the Suippe, east of Reims. The Americans faced a very difficult task. The German lines were up to twelve miles deep, and had been under development since 1915. The second line was based on the hill of Montfaucon, the third line (the Hindenburg Line) on hills at Romagne. The entire area was hilly and wooded, cut by steep sided valleys, many running across the proposed line of advance.

The area was also badly supported by road and rail links. The Americans had only recently fought a battle at St Mihiel, (12-13 September 1918) east of Verdun, and Pershing had to transfer 600,000 men along three minor roads to reach his new front west of the city. The fighting at St. Mihiel had also inflicted heavy losses on some of Pershing’s best units, and so the attack in the Argonne had to be made with many fresh inexperienced troops.

The combined Franco-American attack began on the morning of 26 September. Over the first five days the French advanced nine miles, penetrating deeply into the German lines. The Americans did less well. Their attacks were enthusiastic, determined but not always well organised. Along the Meuse they were able to advance five miles, but in the Argonne forest they were only able to move two miles. By the start of October the divisions used in the initial assault were exhausted, and Pershing was forced to order a halt while new divisions replaced them in the line. During this period Foch came under great pressure from Clemenceau to replace Pershing, but Foch was well aware of the difficulties facing the Americans and stood his ground.